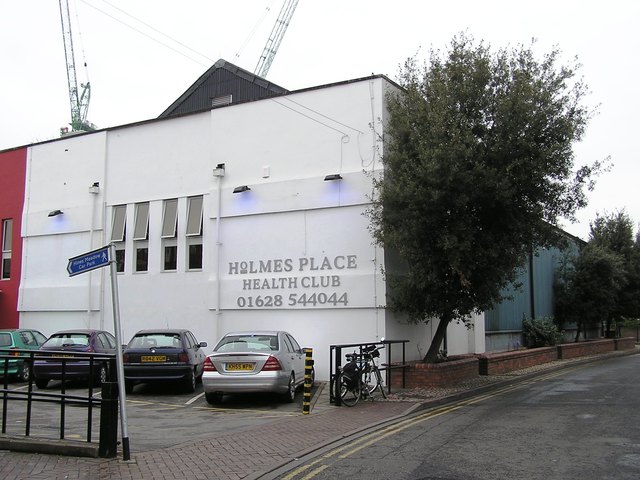 Located in Maidenhead, Berkshire on Crown Lane, just off Bridge Street. The Ritz Cinema was designed for the Union Cinemas chain by architect A.H. Jones. It had a modern brick facade and foyer, and seating in the auditorium was for 748, all on a single floor. The auditorium was in an Art Deco style, with green & orange coloured walls, black doors and stainless steel fittings. It opened as the Ritz Cinema on 26th January 1936.

Union Cinemas were taken over by the Associated British Cinemas(ABC) chain in October 1937. ABC closed the Ritz Cinema in 1944, possibly due to wartime conditions. It never re-opened as a cinema, becoming Harvey’s woodworking company.

In later years the building became the Berkshire Racket Club specializing in games of squash and badminton. In recent years it has become La Roche Fitness & health centre and finally a Holmes Place gymnasium. It was demolished by 2015.

There is a small picture of the Ritz on this webpage.

This is incorrect information. This picture house was never a skating rink. The Skating Rink and The Picture Theatre/Ritz were separate buildings although located in the same area. The Skating Rink was built about 1910. The proprietor was one George Gude. Later became The Hippodrome. Both these venues were operating at the same time for a period. George started his roller skating business by holding roller skating lessons in the pavilion Maidenhead as a temporary venue until The Roller Rink was constructed. The Roller Rink was later occupied by Harvey’s a woodworking company who later also occupied the Ritz building.

This building has been demolished. The site has been a car park since at least 2015.