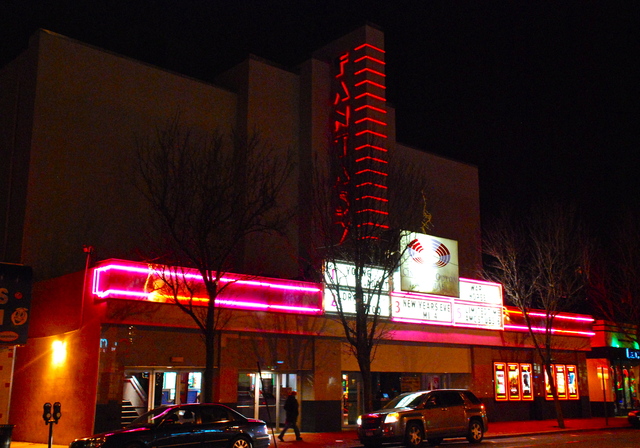 The Fantasy Theatre was opened in 1929 with 1,584 seats. It was taken over by Century Theatres followed by RKO Century, followed by Cinepex Odeon who closed it on January 28, 1988. Cineplex Odeon converted it into a five-plex, reopening on September 2, 1988.

I worked there as an Asst Manager and Manager in the late 70’s and 80’s when it was Century and RKO Century. Hired by Century in 1978.The last film I can recall raking it in was ‘’ The In Laws'‘ with Alan Arkin and Peter Falk.Today the Theatre is part of AMC.Just by going to movies the business is not what it was.I think the rise of Netflix and You Tube could be forseen even as far back as 1980. Cable was starting to emerge. Cineplex had the wrong idea. The CEO believed people would travel to these Cinemas for real butter on the popcorn and real ice cubes in beverages.That did not last and I don’t believe they still do that in their Canadian theatres.They never did feasibility studies. They spent a fortune to five plex a Cinemas in Clearwater,Florida The Sunshine Mall 5. Only to turn it eventually into a dollar cinema which destroyed it.Eventually it and the shopping center were torn down and Condos are on that site.

The neon and the lettering have recently been removed from the vertical blade; I have not yet spoken to anyone so I don’t know its future plans.

The facade has been shorn of all neon and marquee boards, and now sports the same bland, generic reddish AMC logo over the entrance, common to just about all AMC multiplexes these days.

When AMC did their exterior rebranding of the Shore 8 in Huntington they left the old Cineplex Odeon vertical but it now has AMC at the top and theaters vertically. See my photos on that site.

Not sure if the name FANTASY on the blade had been removed back when I posted 12/30/2019, but it is gone now. Photo added.

Please update RKO to RKO Century Warner in previous operators, it was never a solo RKO owned, only as RKO Century.

This was to reopen on August 28th, 1988 but was delayed a week. Two more ads posted.

Looks like more changes coming to the bland facade. Construction shedding is up above the entrance and sidewalk for the entire length of the building. The cinema is still open for business. Photos uploaded I took just today.

I thought bland was the AMC signature; not even showing the name of the theatre. I was surprised when they left the vertical on the Shore.

Why even have Fantasy in the name when the word has been stripped from the building these past few years? Either the name will be going back up (doubtful) or their just fixing some defect and will shortly remove “Fantasy” from all future advertisements and listings.