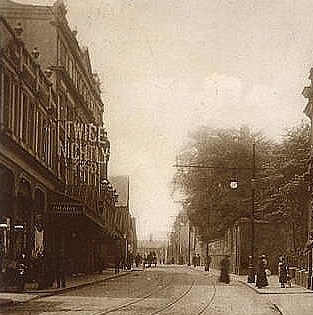 The Grand Theatre was opened on 25th March 1886. It was built for Andrew Melville, and was designed by architect Oliver Essex in an Italian Renaissance style. Seating was provided in orchestra stalls, pit stalls, dress circle and gallery levels, with private boxes on each side of the proscenium. Sadly, six weeks after it opened the Grand Theatre was destroyed by fire, all that remained was the façade and the side-walls. A carpenter employed at the theatre was killed in the blaze.

The theatre was rebuilt within the original walls, again to the designs of Oliver Essex, who retained his original facade. The Grand Theatre was re-opened on 13th November 1886 with a production of the opera “Maritana”. The theatre then embarked on a successful career, presenting touring companies, pantomimes and variety shows. It originally had a capacity for 2,500 (including standing room). In later years there were 640 seats in the orchestra stalls, 345 seats in the dress circle and 450 seats in the gallery. The proscenium was 21 feet wide, the stage was 36 feet deep and there were ten single dressing rooms and two chorus rooms. The orchestra pit could accommodate 18 musicians.

In late-1899, noted theatre architect Frank Matcham was employed to make improvements to the theatre, and he also designed a splendid iron and glass canopy across the front of the building. A Bioscope projector was installed in the early-1910’s to screen short films and newsreels as part of the variety programmes. The theatre was taken over by Frederick W. Purcell, then by Wallace Revill, followed by Thomas Allen Edwardes. On 4th September 1916, the Grand Theatre began a two weeks engagement of the D.W. Griffith film “Birth of a Nation”.

On 15th May 1925, the Grand Theatre presented the first ever performance of the stage version of Bram Stoker’s “Dracula” which starred Hamilton Dean. In October 1943, the Grand Theatre was taken over by Oswald Stoll’s Coliseum Syndicate Ltd., based at the famous London Coliseum Theatre. Prince Littler was in charge of productions. In 1950, Stoll’s company also purchased the nearby Hippodrome Theatre from Circuits Management Association (Rank Organisation), who had been operating it as a cinema, with a view to converting the Hippodrome Theatre back to live theatre use and putting the Grand Theatre up ‘For Sale’.

The Grand Theatre was closed after performances by the Ballet Rambert of “Les Sylphides” and “Peter and the Wolf” on 9th December 1950. Any usable equipment was transferred across to the Hippodrome Theatre, which re-opened as live theatre on 23rd December 1950 with the pantomime “Dick Whittington”.

The Grand Theatre stood empty and unused until it was purchased by Mecca Ltd. on 11th December 1957, for conversion into a dance hall. In 1958 the building was totally gutted back to the bare bricks and the roof was removed and replaced. After a total internal remodel in which a maple-wood sprung dance floor was installed which was surrounded by a viewing gallery at the former dress circle level, it re-opened in 1959 as the Locarno ballroom. The original façade was retained. The Locarno was popular through the 1960’s and into the 1970’s. It then became a nightclub, first known as Tiffany’s, followed by The Ritzy, Eclipse and McClusky’s. By 2008, it was a large Chinese restaurant named May Sum. By 2019 it was a bar named House of Holes.