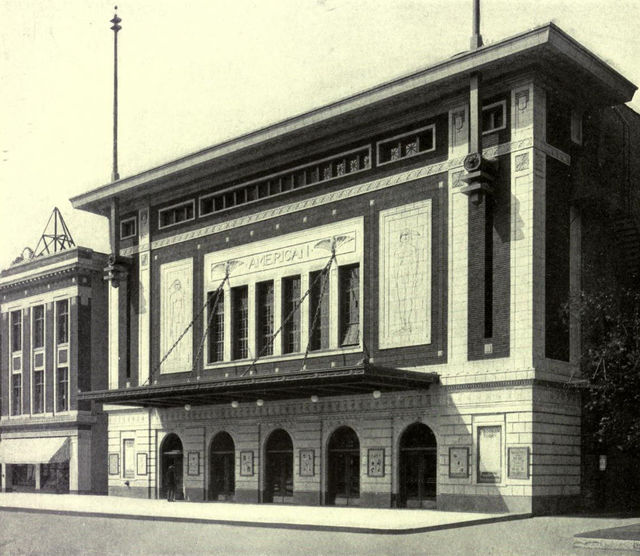 The American Theatre opened around September 1, 1914 in the Union Park neighborhood on N. Ashland Avenue at W. Madison Street, just a few blocks east of the present-day location of the United Center. It was operated by Jones, Linick & Schaefer as a vaudeville theatre. By 1926 it was operated by the Orpheum Circuit.

In the 1950’s, the American Theatre was part of the Essaness chain. By the mid-1960’s, it was showing Spanish-language films as the Teatro las Americas. It closed in 1971 and has since been demolished.

This is part of an article from the Suburbanite Economist, dated 2/1/61. Fair Play for Cuba is best remembered by one of its former supporters, Lee Harvey Oswald.

John A. Rossen, chairman of the Chicago chapter of the Fair Play for Cuba committee, is president of a corporation operating the American theater at 8 N. Ashland, it was disclosed this week. Rossen is the former Communist party organizer who once operated the Cinema Annex theater near Kedzie and Madison, which specialized in the showing of Russian films, many criticized as being Red propaganda.

Rossen, who was a columnist for the Daily Worker, Russian propaganda newspaper, also publishes the Maverick, a pro-Communist newspaper. Rossen is listed as president of Empresas Latinas Inc., chartered April 12, 1960, to show Latin and Spanish films at the American theater. Julio Partillo is secretary-treasurer and Fred Rodrigues is manager. Both were associated with Rossen at the Senate theater after he left the Cinema Annex.

Just a nostalgia note, this theater was situated a trifle north of
the Madison,Ashland and Ogden intersection where there was an old early skyscraper on that little island that hosted the revolving Turtle Wax turtle.

Here is An early photo of the American Theatre, from a 1916 book, “Theatres and Motion Picture Houses” by Arthur Sherman Meloy.

This was a remarkable building. Mahler and Cordell were certainly paying attention to what was going on in Midwestern architecture during the period. I don’t know of any other theater that displays so much of the Prairie style. It’s too bad this one has been lost.

Here is a “What Was There” link with a fade of the American Theatre.

The lobby also looked a lot like the Vic. THSA photo.

I think the American was likely an uncredited John Eberson collaboration. The arrangement of the facade is very similar to other early Eberson designs including the Vic and Crown in Chicago. The Crown was built for William Wieboldt in 1909. The contractor for the American was R.C. Wieboldt, his son.

It should also be noted that the American opened under Jones, Linick, & Shaefer with a vaudeville policy

August of 1915 seems rather late for the American Theatre to have opened. Not only was the house listed in the 1914-1915 American Motion Picture Directory, which must have gone to press fairly early in 1914, but also in that year’s Chicago Blue Book directory, published in December.

A May 5, 1914 article in the Chicago Tribune reported a contretemps that had taken place at the theater when a non-union landscape artist came to paint the scenic curtain for the house, leading to a walkout by union sign, scene and pictorial painters working on the project. The walkout ended when the landscape painter agreed to join the union. This sort of decorative work is typically undertaken when a theater is fairly close to completion.