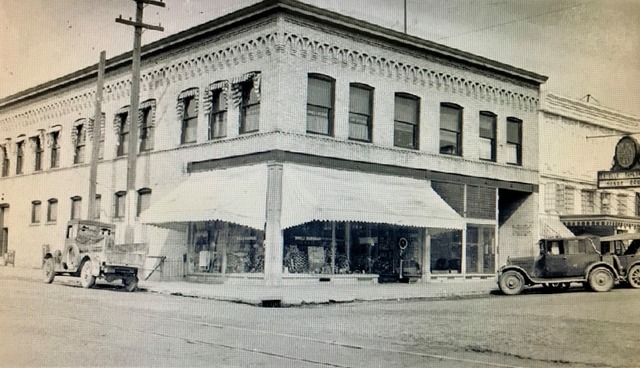 The Spokane Daily Chronicle says that the Liberty Theatre closed and in 1942 became the Victory Shop, a patriotic organization. In 1943, after the Victory Shop left, it was remodeled for non-theatrical uses. The building still exists in downtown Coeur d’Alene as one of the many stores, which line the bustling Sherman Avenue.

The Liberty Theatre is listed in the Film Daily Yearbook of 1940 with 700 seats.

“One of my retirement activities has me volunteering one day a week at the Museum of North Idaho. My main function is to go through the photo collection and research the content of the some of the photos locating for when and where the photo was likely taken. I came across this one a while back, and thought I would share with the group. Most of us might remember the locations of the Wilma, Dream, and Roxy Theaters in the downtown area and may have attended movies in all three. But what about the Liberty Theater? Others will only remember Dingles Hardware as being located on the southeast corner at 4th Street and Sherman Ave. But did you know it had a prior location. This photo was taken in 1928 and shows John Dingle’s store located at 305 Sherman, which is on the northeast corner of 3rd Street and Sherman Ave. The store occupied the first floor and basement. If you look closely you can see the marquee and the part of the edifice of the Liberty Theater located next door. On the marquee are the words "Estelle Taylor - Honor Bound.” “Honor Bound” was released in theaters around the country in April of 1928 and featured Estelle Taylor and George O'Brien as stars of the 1 hour 10 minute film billed as a “daring drama of life in a convict labour camp.” A former chorus girl on Broadway, Taylor was in her third year of her second marriage – this one to World Heavyweight Boxing Champion Jack Dempsey. She divorced the fighter in 1930. She had become a “star” while acting in “The Ten Commandments in 1923. George O'Brien made his mark as the lead in John Ford’s 1924 thriller "The Iron Horse.” He would go on to act in a number of Ford’s cowboy movies over the years including “Riders of the Purple Sage.” Note: The City Directory for 1927-1928 has both businesses located at 305 Sherman. Some of the later directories list the door where you entered the theater as 305 ½."