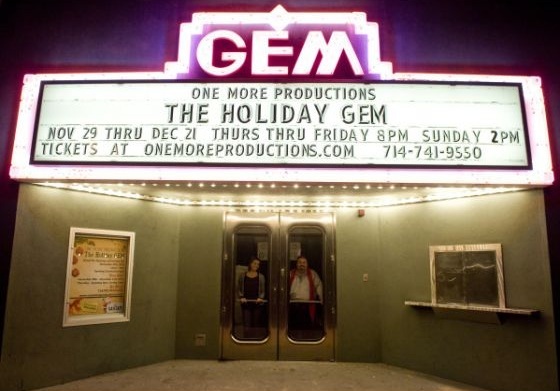 This little theatre showed old movies when I went there in 1971 to see "Hud" and "Hondo". It was built and opened in 1923. In 1939 it was remodeled in a Streamline Moderne style to the plans of Santa Ana based architect Austin Widman. 1941 & 1943, the Gem Theatre was listed with a seating capacity of 293 and in 1950 it was listed as having 410 seats and the address was given as 220 N. Euclid Street (this part of Euclid Street has now been re-named Main Street).

I later learned in a newspaper article how the theatre had achieved notoriety for itself, (becoming the first porno-movie house in the city in the 1970’s) then closed down by the city of Garden Grove for "indecency" by a city campaign, largely due to the fact that it was right across the street from the Joy Bells Christian Bible Bookstore, and many patrons didn’t like what they saw.

This theatre is very much alive and well. In great shape and being used for community theater and live bands.

Was this theatre called the Gem when it was a movie house? There was once a theatre in Garden Grove called the Grove (not yet listed on Cinema Treasures, unless this is it under another name.) I never saw it, but it was owned in the 1950s by the Vinicoff Theatre Circuit, which also operated the Garfield Theatre in Alhambra which it owned in partnership with Edwards Theatres. Every once in a while, tickets bought at the Garfield would say “Grove Theatre” on them.

I lived right around the corner from the Gem, in the late 1950s and ‘60s. I saw many movies there as a young cub, and remember it fondly. The Gem is located in what is the old downtown section of Garden Grove, and may very well been the original theater for the town. It is a splendid little cinema and I am glad that it is doing live performances.

I saw a few movies there. The one that comes to mind was the Flintstone Movie. It was advertised as in color but was black and white. I also remember the projections announcing before the movie “No Seat Hopping….”