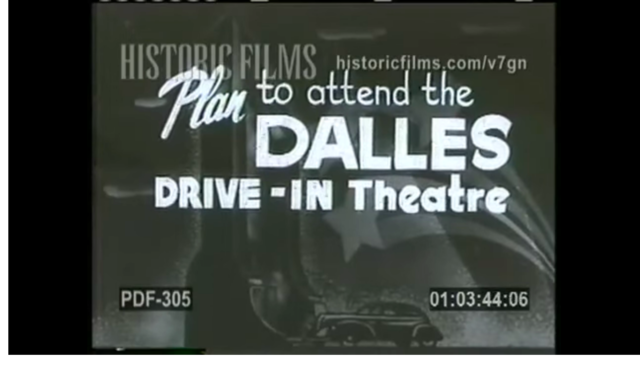 This one one of three drive-in theatres in The Dalles, Oregon, the others being the Starlite Drive-In and the Motor Vu Drive-In. An aerial shot and distant photo shows it used to be where Home Depot is today. The Dalles Drive-In was opened prior to 1955 and was operated by Sterling Theatres Inc.

The drive-ins were about seven miles apart, and hope to find out more information about them.

Here’s a photo of Chenoweth Loop in The Dalles, featuring the drive-in in the center of the photograph: http://lib-kni-cdm01.uoregon.edu/cdm4/item_viewer.php?CISOROOT=/cgdc&CISOPTR=8087&CISOBOX=1&REC=2

Current address for Home Depot which now occupies the site of the drive-in.

There were actually three confirmed drive-ins in The Dalles. The Dalles Drive-In, the Starlite Drive-In, and the Motor Vu.

From The Dalles Chronicle 1953 newspaper article: “Wasco County today issued a building permit to Walter Eschebeck of The Dalles to erect the Starlight Drive-In Theater east of the city limits near the bluff overlooking the site of The Dalles Bridge. The permit is for erection of a steel tower to hold the screen and 1,500-square feet block building to house the projection room and concession bar. Listed value of the building permit was $15,000. When completed, the Starlight will be the third drive-in theater and the sixth motion picture theatre in the immediate Dalles area.”