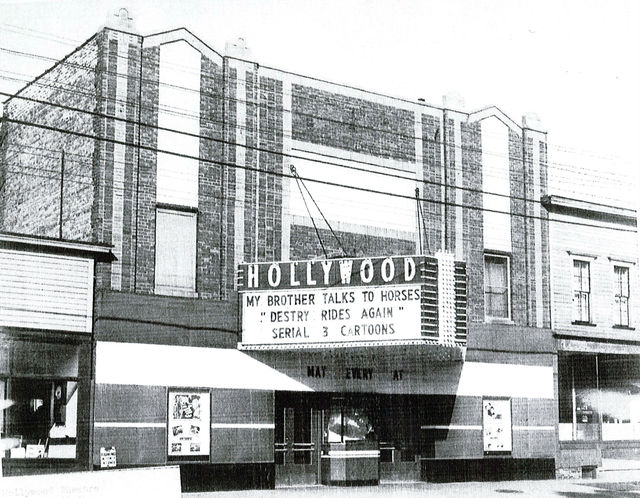 Charles Pacini opened the Butterfly Theatre on March 17, 1917. Following a refurbishment it reopened as the New Butterfly Theatre on September 2, 1932. Following another refurbishment it reopened as the Hollywood Theatre on May 10, 1941. It was closed on May 2, 1954 with Edward G. Robinson in “The Glass Web” & Dean Martin and Jerry Lewis in “Scared Stiff”. It is now the Polish Legion of American Veterans Post 34 in Kenosha, Wisconsin. It is now the PLAV’s banquet hall.

The theatre was built strictly for movies, and had some of the most popular serials of the day in Kenosha.

(Kenosha Evening News, April 14, 1921)
KLINKERT BUYS THE BUTTERFLY
Butterfly Theatre to be Purchased by the Klinkert Interests
SAXE RETAINS OTHERS

Negotiations are under way today for the transfer of the Butterfly Theatre on Milwaukee Avenue, one of the chain theatres formerly owned by the late Charles Pacini and recently sold to the Saxe-Dayton company, to the Klinkert interests of Racine, the owners of the building in which the theatre is located. The purchase price for the theatre is understood to be in the neighborhood of $12,000, this price to purchase the lease and equipment of the theatre. The sale does not carry with it the right to participate in the film franchises formerly owned by the Pacini estate, but it is understood that arrangements may be made with the new management of the theatre for a continuation of many of the film services now used in the theatre.
SAXE TO TAKE OVER PROPERTY.
“This deal has not been closed,” explained Joseph Funck, the administrator of the Pacini estate, “but it has advanced far enough to be a certainty. We expect to sign the papers on the deal on Friday afternoon. The money for the sale is now in my hands and will be transferred to the Saxe-Dayton interests, who included the ‘Butterfly’ in the purchase of the Pacini theatres here several weeks ago."
It was also announced that the closing up of the deal for the sale of the Majestic, Strand and Butterfly to the Saxe-Dayton company would take place at this same time. The new owners of the Majestic and Strand will take over the property on Saturday evening.
WILLARD WELCH MANAGER.
Coincident with the announcement of the change in ownership of the theatre came the word that Willard Welch who since the death of Mr. Pacini has been manager of the three theatres, had been retained by the Saxe-Dayton company as manager of the Majestic and Orpheum theatres. No immediate changes will be made in the management of the theatres as the Saxe-Dayton theatres is well pleased with the successful management of the theatres in the past.
The same valuable film franchises held by the Pacini theatres have been purchased by the new company and the same high grade attractions will continue to be shown at the theatre.

There is a 1940s photo of the HOLLYWOOD at Wisconsin Theatres www.onelist.com/group/WisconsinTheatres .

The HOLLYWOOD did close in April 1952 but managed to reopen again for a time later as a Friday, January 3, 1954 ad has “Mississippi Gambler” paired with “Bonzo Goes to College” for the weekend with adult admission at 50 cents and children’s tickets at 14 cents.

The HOLLYWOOD Theatre building/Polish Legion of American Veterans was sold in February, 2012 to L&M Meats, which has plans to expand the kitchen and utilize the HOLLYWOOD’s former auditorium for catered events. Some interior and exterior cosmetic alterations are ongoing.

A news article reports that the HOLLYWOOD (nee BUTTERFLY) Theatre is being reborn as “Circa 1880.” Plans announced by the new owners include restoring “some of its past features, with a vision toward creating a special events destination by incorporating details that would awe guests, while keeping the space neutral enough to host wedding ceremonies, receptions and all manner of banquets.” The venue will feature a 9-foot dressing room and lounge area. The auditorium will showcase the original 22-foot tall ceilings and a new grand staircase leading to the balcony, and the owners say “We’re trying to keep the historical integrity of the building. Over the years, a lot of things were taken out.” The Polish Legion of American Veterans will still meet there for free once the occupancy permit is secured, probably in late February or early March.

For decades, 4902 Seventh Ave. was home to the Polish Legion of American Veterans. Before that, it was the Hollywood Theater. And long before that, it was the Butterfly Theater. Now it’s the new home of “Circa on Seventh,” a banquet hall operated by the owners of L&M Meats and Catering. L&M’s owners, Kathy and Keith Meyer, are also re-branding their formal catering business as “Culinary Infusion.”

PLAV bought the Hollywood Theater in the 1960s and filled in the slanted theater floor to create a banquet hall. The theater’s 22-foot ceilings were dropped down to lower heating costs. When Circa’s contractors ripped out the drop ceiling, they exposed an old movie theater balcony.

“Anyone who had been in there since the 1960s didn’t know this balcony existed,” said Hanni Gould, general manager.

Over the decades, the building’s many transformations eliminated most of the period details, but a smattering of architectural treasures have been saved. The movie theater box office that stretched to the left of the current entrance is gone now, but if you lift up the floor mats in the doorway, you can see old tiles spelling out “Butterfly.” A decorative glass holder on the bar contains dozens of ceramic insulators taken out of the walls when the old knob-and-tube electrical system was removed. And they’re still trying to figure out what to with a “corbel” (decorative molding cap) shaped like a woman’s face that was one of a dozen mounted around the theater.

The chandeliers and light fixtures are all new, but the Meyers found old pieces of the original light fixtures in storage that strongly resemble the ones they chose.

“It’s uncanny how similar they are,” Kathy Meyer said. “When people ask us if things are original, that’s when we feel the most pride.”

They also choose to install some “Edison lights,” with flickering filaments that give the space a retro feel. The women’s bathroom has a “blingy” chandelier, while the men’s restroom is a bit darker, with a large Edison light.

“We wanted it to look original without being dated,” Gould said.

The building to the south, which had been purchased by PLAV for storage, is now Circa’s banquet room. An exposed brick wall along the north side of the room is actually the exterior of the movie theater.

Since the building was originally a movie theater, it did not have windows, so the Meyers had several windows built into the second floor to bring in natural light. They installed a new, dark wood dance floor and bar. Upstairs, there’s a private “Bride’s Room” with a long makeup table, large restroom, full-length mirror and built-in refrigerator. It’s a cozy, well-lit space that allows brides and their bridesmaids a place to freshen up and escape. The window has a view of the lake.

Circa on Seventh already has hosted several private events and will be open to the public on Thursday for the Chamber of Commerce’s “Business After 5” networking event (admission $5). Gould said the price range for private, formal, catered dinners is $14 to $29, with other options available.

Dear LouRougani,
thanks so much for the info about this theatre and organ! Glad to know the building is still standing and used for something.

According to the “Encyclopedia of the American Theatre Organ” by David Junchen, pg. 631, the “Butterfly Theatre” in Kenosha, Wisconsin, had a Smith theatre pipe organ installed in 1923. This organ’s size (# of manuals and # of ranks of pipes) is not given in the book (probably not known at time of publication), but the blower serial number was/is L836, and it was a 1 horsepower blower supplying 10" of static wind pressure.

Thanks for letting me know it’s a two-manual organ.

The organ may have been in the B'nai Brith Temple in Library Park in 2005, but is it still there today? (2014). Is it playable? How many ranks? I’d love to know, and perhaps I should contact them directly.

I’m an organ enthusiast working on a historical/information webpage on Smith theatre pipe organs (Smith, Seeburg-Smith, Leathurby-Smith, and Smith-Geneva). Info about this organ will help me out with the census/opus list. Thanks a lot!

The temple was offering to donate it to any viable theatre about two years ago. Contact Rabbi Dena Feingold there for more details. Thanks.

Charles Pacini closed his Cozy Theatre on March 12, 1917 moving the equipment to the new build Butterfly Theatre which launched on March 17, 1917. The architect for the theater was Charles O. Augustine. Augustine would also draw plans for refurbishing the nearby Majestic Theatre. The new Butterfly launched with 650 seats, a Bartola Orchestra pipe organ. The opening feature was Charlie Chaplin in “On Easy Street” and Helen Rosson in “The Undertow.” The theatre was equipped for sound to remain viable. It received a major refresh relaunching as the “New” Butterfly Theatre on September 2, 1932 on a new 20-year lease.

The Hollywood is located at 4902 Seventh avenue where the Butterfly theater once operated. However, for the opening tonight the building has been completely renovated and redecorated. The interior is done in maroon, cream and orchid and the sidelights are rainbow colored fixtures which may be changed to any color desired. Self-rising seats will be another innovation chosen by Mr. Lencioni for the comfort and convenience of patrons and a new mirraphonic sound system is a feature of the new theater. Motion pictures will be unreeled upon a new processed screen with a highly reflective surface which has the added virtue of being exceptionally easy on the eyes. A modernistic canopy will greet movie patrons as they approach the Hollywood, and new draperies and carpets will add to the attractiveness of the interior.

The new theater will be open every evening, and for Sunday and holiday matinees Mr Lencioni, who was born in Kenosha, made his home here until he moved to Sheboygan Falls to manage a theater. Three years ago he returned here to manage the Lincoln. During the past week his many friends in the city have extended their best wishes for success in his new venture.