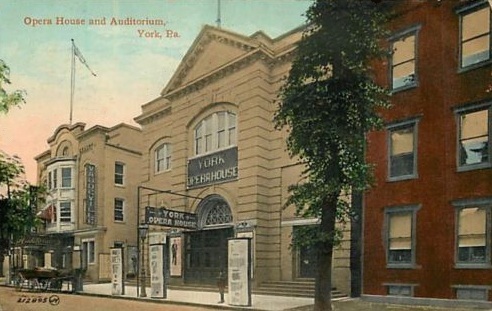 The York Opera House & Auditorium was opened on May 23, 1881. In 1902 the Opera House was redesigned by architectural firm Hamme & Leber. In the early days of cinema it was equipped with a Kinetoscope. In 1930 it was taken over by Warner Bros. Circuit Management Corp. Warner Bros. closed it in June 1936.

There is a York Opera House listed under York PA in the 1897-98 edition of the Julius Cahn Official Theatrical Guide. It lists 1,500 seats. The theater was on the ground floor and had both gas and electric illumination. The proscenium opening was 32 feet wide X 30 feet high, the stage was 40 feet deep. B. C.Pentz was Mgr. and admissions ranged from 25 cents to $1. There were 8 in the house orchestra. There wer 3 daily newspapers, and 3 hotels for show folk. The 1897 population of York was 30,000.

This weblog post from Preserving York has a pre-1915 postcard view of the York Opera House and Auditorium, which were actually two distinct theaters. The text says that they were located on the east side of South Beaver Street, between West Mason Street and West King Street, and a comment says that they were on the site of the York Telephone and Telegraph Building. The telephone company apparently occupied two buildings: an Art Deco structure on the corner of Mason Street and a Colonial Revival building next door to the south.

I’ve set Street View to replicate as near as possible the vantage point of the early postcard view. A couple of small buildings intervened between the Auditorium and Mason Street, so the Auditorium occupied the southernmost part of the parcel the telephone company’s Art Deco building now occupies. The Opera House must have been entirely on a portion of the site of the Colonial Revival building. The passageway between the two theaters must have been about where the entrance and first bay of windows in the Colonial Revival building are now.

An item in the May 1, 1926, issue of Motion Picture News reveals that the two theaters were still standing at that time, but the Auditorium had apparently been renamed the Orpheum Theatre. The theaters had just been purchased by Nathan Appell, who intended to demolish them and replace them with a new theater, but that project was obviously never carried out:

“The historic York Opera House and the Orpheum Theatre adjoining, in the heart of the business section of York, Pa., are to become the site of a new theatre that will have a seating capacity of 3,000 and the construction of which will be started next spring. The announcement of the enterprise was made on April 13 by Nathan Appell, head of the Nathan Appell Theatre Enterprises, which controls a number of motion picture, vaudeville and legitimate theatres in York, Lancaster and elsewhere in Pennsylvania.”

The York Preservation post also says that the Opera House was designed by the Dempwolf family. John August Dempwolf began his practice in York around 1880, so the Opera House must have been one of his first projects. I’m not sure when his brother Reinhardt joined the firm.

The address of the York Telephone and Telegraph Building I found on the Internet is 31 S. Beaver Street, but the theater addresses were a bit higher. I found a historic address of 33-35 S. Beaver for the Orpheum, so the Opera House must have been somewhere between 37 and 41.

In August of 1930, the Warner Bros. Theatre Circuit bought the still-operating Opera House to close the facility. In June of 1936, it was razed after a salvage sale. Harry Houdini and Douglas Fairbanks, Sr. performd there. And Charles C. Krantz served as stage manager for 50 years to closing.

An extensive architectural redesign was approved and carried out to the plans of the firm, Hamme and Leber with the Opera House having a grand reopening in 1902.