The Kiddie Kinema opened in 1969 in the shopping center near Cedar Lanes. So parents could feel safe admission was limited to children only in the theater, which operated on Saturday and Sunday with only three matinee showings. The name was most likely taken from the old Kinema Theatre in Fresno.

In April of 1970 it became listed as Shellmel’s New Kiddie Kinema. A partner in this enterprise was Mike Connors, a native of Fresno, who was then at the height of his fame as television’s ‘Mannix’. Mr. Connors said there were plans to expand this concept beyond Fresno.

The Kiddie Kinema was out of the Fresno Bee listings in 1971 but it had a brief run as the Bijou Cinema from September of 1973 to 1974, playing old movies. The Bijou’s owner was Doug Wright, the originator of the Old Time Movie in Anaheim. The size of the theater was small but it got even smaller when Mr. Wright widened the rows and replaced all of the children size seats with more comfortable adult seats. He also spent a considerable sum bringing the bathroom fixtures up to adult proportions.

The last time the Bijou Cinema was heard from, in the mid-1970’s, it was one of many Fresno adult theaters playing X-rated films.

On July 28, 1972, the venue became National Cinema’s Cedar Cinema with repertory double feature films starting with the Marx Brothers in “A Night at the Opera” and “Day at the Races.” On November 29, 1972, National switched to 16mm adult films. Under new inedpendent operation, the Cedar Cinema switched back to repertory films on April 6, 1973. It closed September 6, 1973.

On September 28, 1973 and under independent operator Doug Wright, the fifth operator of the venue, it was renamed the Bijou Cinema staying with repertory films. The opening film was “Zorro’s Fighting Legion” and a Little Rascals festival. The Bijou failed going out of business less than a year later on June 16, 1974.

In August of 1974, the venue went adult as the Bijou Adult Cinema which likely ceased operations at the end of lease on 1979.

Article about this cinema 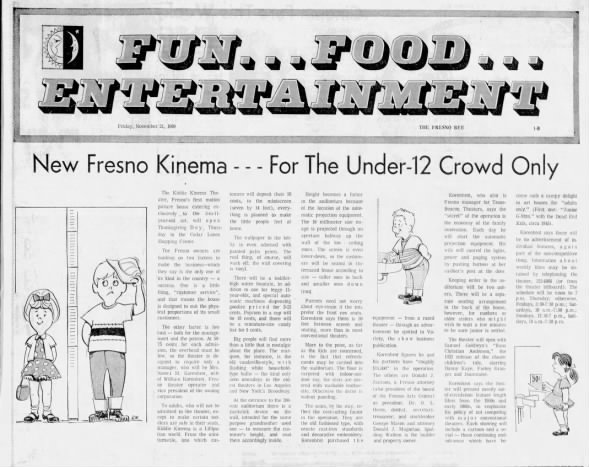