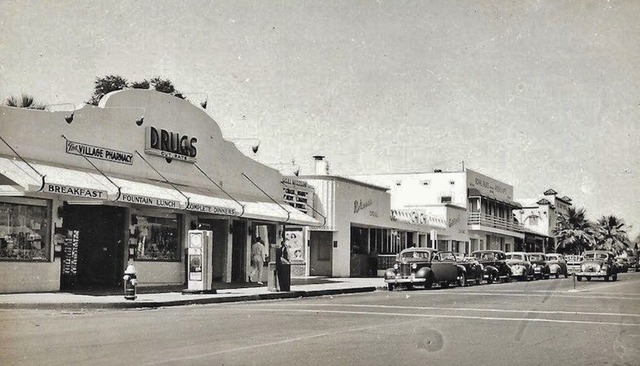 Zaddie Bunker (1888-1969) later became known in the press as Palm Springs ‘flying great-grandmother’ for her aeronautical exploits after earning her wings at 65. According to the Los Angeles Times, in 1959 at the age of 71, she flew faster than the speed of sound as a passenger in a North American Super Sabre.

The Desert Sun covered the last day of operation for the Village Theatre on May 13, 1984. For the occasion Metropolitan Theatres screened two William Powell films from the 1930’s, “Libeled Lady” and “The Thin Man". It was said that Metropolitan was unable to find a 35mm print of “Lawyer Man", the very first movie to play at the Village Theatre. Admission for the theatre’s last run was 50 cents with 25-cent popcorn.

After the Village Theatre was demolished, an addition to the Desert Plaza shopping center was built on the site and the Strebe family enjoyed a $5 million dollar payday.

The Village Theatre might have been listed as an independent house in the newspapers before 1981, but before the end of 1977 it had already been taken over by Metropolitan Theatres. It was Metropolitan that twinned the Village and Plaza Theatres in 1977, as noted in this brief article in Boxoffice of January 2, 1978. The article features a drawing of the twinned auditorium of the Plaza, but says that the Village got new carpeting, draperies, and lobby treatment. Both houses got all new projection and sound equipment. Both theaters reopened shortly before Christmas, 1977.

Opening date was November 11, 1932 launching with the film, “The Lawyer” with William Powell. Final day was May 13, 1984. The final regular shows were on May 12, 1984 showing “National Lampoon’s Vacation” with “Police Academy” on one screen and “Hardbodies” and “Purple Hearts” on the other. And as mentioned above, on May 13, 1984, the theatre returned to William Powell showing “The Thin Man” on one screen and “Libeled Lady” on the other.