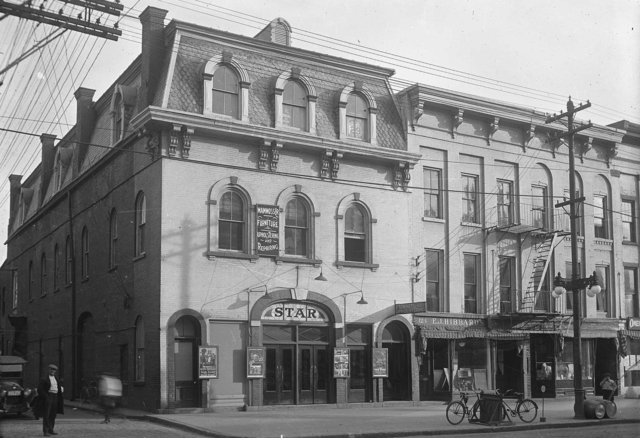 Built into a previous hat shop storefront, the Star Theater offered an auditorium slightly classier than a nickelodeon, but at the same price. Owned and managed by Albert Kaufman and his son-in-law, Wesley Shane, the Star Theater opened on June 23, 1913. The interior design was by Paul F. Kallies, who also designed Rome’s Carroll (later Strand) Theater. The Star’s ground glass screen was 15 feet 4 inches by 11 feet 6 inches, and had to be re-ordered during its initial installation because it was discovered that the screen had cracked in shipment. Past an erected lobby, the pitched auditorium seated 550 persons, and music was supplied by Yordon’s Full Orchestra.

The Star Theater was sold to the Kallet/Carroll Amusement Company on October 2, 1922. The Kallet Brothers continued to run the Star Theater as a ‘B’ house to the Strand’s ‘A’ pictures, and eventually intended to demolish the building and build a new theater on the site in 1926. These plans were scrapped, however, and the Kallets built the Capitol Theater on Dominick Street instead. Not long after the Capitol’s opening, the Star Theater closed and was converted back into a storefront. It spent its later years as the Big Apple Night Club, a strip club, and was demolished in the late-1960’s to make way for Fort Stanwix National Monument.