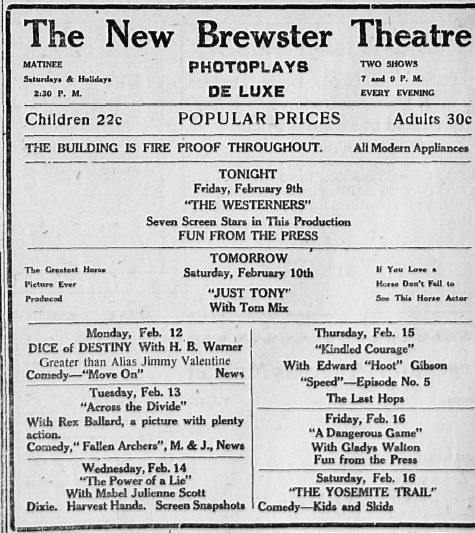 “Irving Wernick, who originally remodeled the old Cameo Theatre, which is now the Ritz, will again take charge of the management of the Ritz Theatre.”

Mr. Wernick’s remodeling and renaming might have taken place in late 1934 or early 1935.

The Ritz building must have been at least two floors, as in the late 1920s there are ads for a Cameo Beauty Shoppe, located “Over the Cameo Theatre.” An article in the May 6, 1921, issue of the Courier mentions a Brewster Theatre, and the July 1, 1921, issue has an ad for it. This could be an even earlier aka for the Ritz, but I’ve been unable to establish that for certain. I’ve never seen more than one theater in Brewster advertised at any given time. The Brewster Theatre was advertised as early as 1919.

An undated issue of the Courier from the fall of 1921 has an item about a Benjamin Zorn who was preparing to open a new movie theater in the Schnieder Block sometime in November. That house might also have been the first Cameo/Ritz, but the project might also have failed. I’ve found no later references to Mr. Zorn, or to a Schneider Block.

As the Ritz, the house appears to have always been operated by the Sussman Circuit. A 1939 Boxoffice article about the new Cameo Theatre that Sussman opened that year mentioned its manager, Henry Flechsenhaar, and said that he had previously been manager of the Ritz. I’m quite sure the Ritz closed when, or before, the new Cameo opened in 1939.

The December 6, 1923, issue of Variety mentions two theaters operating in Brewster, with about 1,000 seats between them. They were the Brewster Theatre and the Strand Theatre (I’ve not seen any ads for the Strand in the Courier.) It’s possible that the Strand was the theater that was to have been opened by Benjamin Zorn in 1921, noted in my previous comment.

So far I’ve found only the one mention of the Strand in Variety, and none in the other entertainment trade publications or the Courier, but an item in the October, 1922, issue of Millinery Trade Review said that Mrs. Violet Sweet had opened a millinery shop in the Strand Building at Brewster, New York.

There is also a mention of the Strand on this web page about Brewster’s Boy Scout Troop 1, which says that the managers of the Strand Theatre had made a Memorial Day film in 1925, featuring the local scouts.

The Strand Theatre was scheduled to open in December, 1921, but the opening was delayed. I haven’t found the exact opening date, but it was definitely in operation before February 24, 1922, when it advertised in the Standard.

I was wrong about nobody opening a third theater in Brewster in the 1920s. It turns out that the Strand itself was a third theater. There are ads in the Standard from this period for both live performances and movies at the Town Hall. I think this must have been the actual Town Hall, rather than a dedicated theater, though.

One ad for the New Brewster Theatre boasted that it was the only ground-floor theater in Brewster, so the Strand and Town Hall were both upper floor theaters. Items in the Standard also confirm that the Strand was the theater in the Schneider Block that Benjamin Zorn was planning to open in 1921. References to the Schnieder Block vanished at that time, as the building came to be called the Strand Building. It was across the street from the Town Hall, but I don’t know where the Town Hall was in 1922. If we find the location of either, we find both.

The Brewster Standard was a weekly paper, and it is available from Northern New York Historical Newspapers. However, it isn’t linked from their search page, so you have to use this link to reach it. NNYHN has archives of a few dozen newspapers from seven counties available, and would be a useful resource for anybody researching theaters in the area.

I found that the New Brewster Theatre opened in January, 1923. The January 5 edition of the Brewster Standard said that Meily and Gauntlett would open the house for public inspection that evening. Full operation would have to wait for the installation of the theater’s heating system.

Thanks, Ken. I really enjoyed researching this theater. There is a surprising amount of information about it in the two newspaper archives, even if it’s scattered about multiple issues of two different papers. The latest bit I’ve discovered proves that the New Brewster Theatre was a different theater than the original Brewster.

The New Brewster Theatre was in the Montesi Building, a three-story and basement brick structure built by Alexander Montesi on the site of a Masonic lodge that had been destroyed by fire in 1918. A theater was planned as part of the project from the beginning, as was a new lodge hall for the Masons on the third floor.

The May 13, 1921, issue of the Brewster Standard described the proposed building. It would have a 60 foot frontage on Main Street, and would extend back 180 feet. The theater would be at the back of the building, and would be 70x45 feet, with a stage 12x25 feet. It would be entered through and arcade 14x90 feet, which would be flanked by two stores.

Although the dimensions differ somewhat, I think it’s likely that the Montesi Building was the project noted in the April 20, 1921, issue of The American Architect, which said that Danbury architect and engineer F. E. Rowe was preparing plans for a 70x145 foot, three story lodge and theater building on Main Street in Brewster.

There is today one building on Main Street, on the second lot east of Park on the south side, that has a footprint about the size of the Montesi Building, but it is only one story. I wonder if it could have been the Montesi Building, and has had its two top floors removed? This is not unusual for old buildings that have upper floor spaces that have become obsolete and are a financial burden for the owners. It is occupied by a business called The Pool Hall, which seems an apt use for an old theater building.

But even if this isn’t what is left of the former theater building, it could be a post-1939 building on the same site. Neither of the buildings right on the corners of Park and Main look new enough to have been built after 1939, and neither has a big enough lot to have accommodated the Montesi Building.

Hey Joe, this is great research. I got to see the Cameo in its final days. It’s still barely standing. It looks like a new plan on revitalizing the town has set it’s sights on demolishing a lot of buildings, including the Cameo.

I think it’s a real shame and short-sighted. I think a genuine building that can offer independent films, event screenings, second-run, and the town even has a film festival, birthday rentals, etc. provides a unique business that other surrounding towns, especially those nearby on Metro-North rail don’t offer.

The existing plan of probably trying to attract restaurants or boutiques seems illogical with the Village’s proximity to Westchester’s retail and dining.