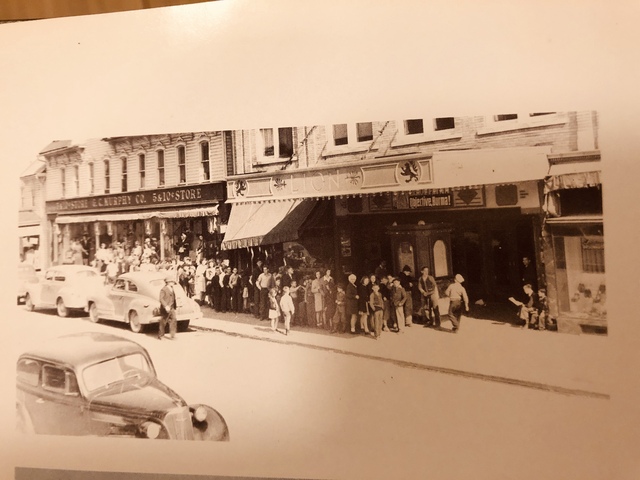 The Lion was reportedly as large and ornate as the co-owned Strand in York. Warner Bros, later RKO Stanley Warner, operated four theaters in downtown York in the 1930s and 40s (Strand, Capitol, Ritz and Rialto) and the Lion in Red Lion. I don’t know if this story is true, as it was only heard in passing, but the story goes that in the late 1960s the Red Lion town council passed a resolution banning the theater from playing anything but G-rated movies. (Red Lion is by and large a conservative, religious community, even to this day.) RKO Stanley Warner responded by closing the Lion the following day.

There is only one photo I know that exists of this theatre. I will try and track down a good copy.

The Lion Theatre opened December 31, 1926 with Walter J. Rothensies as the listed owner but operated Nathan and Louis Appell of the Appell Circuit. The theatre converted to Western Electric Movietone and Vitaphone equipment in August of 1929. Appell sold to Warner Bros. Circuit which continued operation in 1930.

Warner closed the Lion Theatre on May 10, 1958 in part because of a 1957 law disallowing Sunday showings. Robert J. Heller reopened the theatre May 20, 1959 on a sublease. When the city decided to enforce its no-Sunday law, Heller abruptly shut down the Lion on June 6, 1959 – its last day of operation. In 1969, the theatre was demolished.