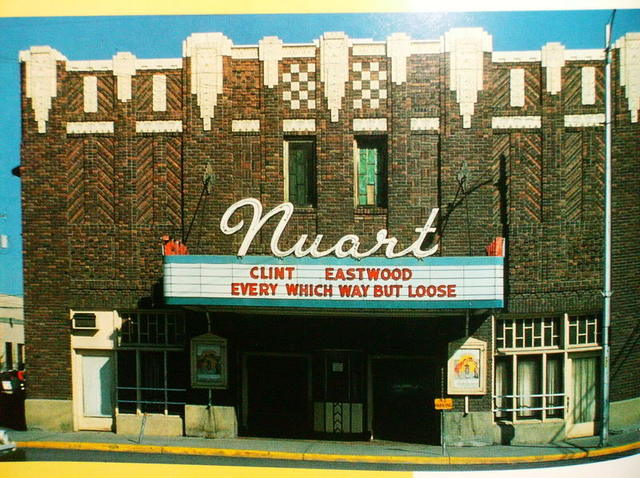 The Nuart Theater, which opened February 12, 1930, was built by Paul Demordaunt, who went on to form a small Idaho theater chain with his partner, Hugh Drennen.

They also operated the local Idaho Theatre, a second-run house, and shared first-run films with a competitor, the Roxy Theatre.

The Nuart Theater is now owned by Blackfoot Community Players who stage live performances and make the theater available to the community for rental. It was placed on the National Register of Historic Places in 1978 with Walter Demordaunt listed as its architect.

Here is a photo, circa early eighties:
http://tinyurl.com/2jwpad

Hugh Drennen was my Grandfather

Thats neat Mark was he your dads or moms dad?Welcome to Cinema Treasures.

The marquee has been drastically changed. Other changes as well. Copy from a Facebook post from the the Bingham County Historic Preservation page. Link with before and after photos at bottom.

The gem of Blackfoot’s downtown, the historic Nuart Theater has been on the national registry of historic places since 1978. The art deco building was built in 1930 by Paul Demordaunt, who owned a small Idaho theater chain with his business partner, Hugh Drennen. Since the 1980s the theater has been home to the Blackfoot Community Players. We are sad to report that the privately owned building has been significantly altered. Over the past several months (not including interior changes) the etched glass windows and doors, the stained glass windows on the second floor and now the iconic and beautiful neon sign of the Nuart have been replaced. These changes were approved by the board of the Blackfoot Community Players who received grant money from the city of Blackfoot Urban Renewal Committee appointed by Mayor Loomis. Public opinion has been overwhelmingly negative to these updates. If you have input, we invite you to communicate with the Blackfoot Community Players board and the Blackfoot City Council who oversee the urban renewal committee. Let them know that these moves are out of favor and that the alteration of historic buildings in general and the Nuart theater in particular have an affect on the entire community. http://www.cityofblackfoot.org/council

I added the Bingham County Historic Preservation page’s revised marquee photo to the Photos Section. For those who may not be able to access the Facebook link.