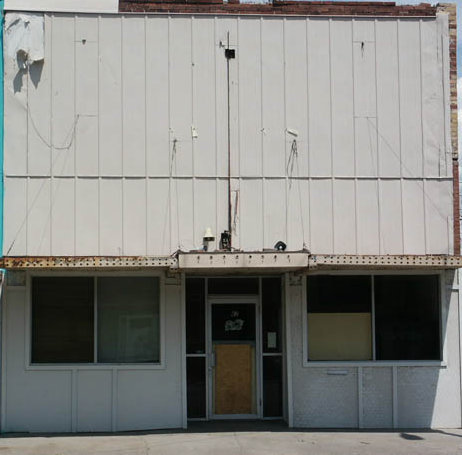 The Idaho Theater, a second-run and B-picture house during the 1950’s, was operated by Demordaunt and Drennen, who also owned the local Nuart Theater.

The theater was very narrow but was still equipped to play CinemaScope, probably just to increase the number of available movies. Sometimes the projectionists would squeeze the picture in slightly so Frank Sinatra became even skinnier.

The Idaho Theater, like most small-town theaters in Idaho, was non-union and hired high school students as projectionists for economic reasons.

In the summer of 2002 the building was empty after being occupied over the years by a variety of businesses. Part of the canopy with empty bulb sockets can still be seen over the entrance to the theater.

My dad grew up on Broadway in Blackfoot and has told me about The Idaho theater. He said he and his best friend used to walk to the Roxy theater a block away while his mother watched to make sure he went there. He would talk to the high school box office girl until his mother went inside, then he and his friend would race down the street and turn the corner where they would actually go to a scifi movie in the Idaho. They would have gotten into trouble if their mothers knew, but they wanted to see such movies like “The Swamp Thing”. Apparently that is where many of the drunks from the many bars in town would spend there time. He recalls hearing beer bottles rolling down the floor as the movie played.

Looking at the photo Ron Pierce has on the other site, it’s hard to imagine them showing anything in Cinemascope. That must have been some viewing experience.