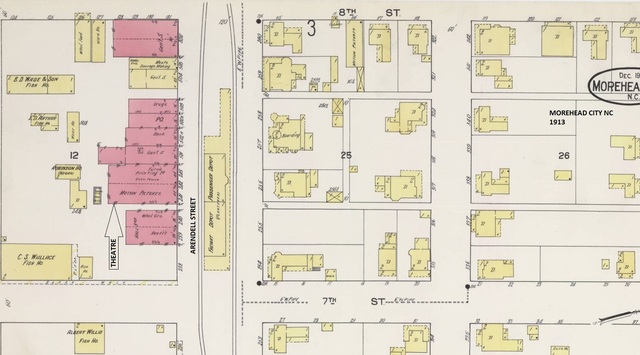 The Palace Theatre was opened in 1911. Later renamed City Theatre, it was open in 1945 with seating listed at 450. It was operated by Everett Enterprises until 1955 followed by Stewart and Everett until it closed in 1976 when it was destroyed by fire.

Any additional information on the City Theatre would be appreciated.

The city directories from the late 1950s-early 1960s give the address of the City Theatre as 719 Arendell Street. I’m sure they are right.

The angle shows that the City Theatre must have been on what is now a parking lot immediately west of Raps Grill and Bar, so it has been demolished.

While the building at 702 Arendell Street certainly looks as though it could have been a theater at one time, it was not the City Theatre.

The caption of a photo on page 54 of Carteret County, by Linda Sadler and Kevin Jenkins (Google Books preview) give the house the aka Wade Theatre around 1933.

The building at 702 Arendell Street was a theater at one time, but was called the Morehead Theatre. It was built by Stewart & Everett circa 1954 to the same design as the Iwo Jima in Jacksonville NC and the Wilrik in Sanford NC. After a new Morehead Theatre (AKA Morehead Twin, listed on CT as Eastern Carolina Showcase Theater) opened at 1309 Arendell Street in 1966 the 702 Arendell theater either closed or was renamed, but it was not the City Theatre. The 702 Arendell theater became a skating rink in the 1970s and was later converted to retail (presently a church).

Some scraps of information: The records from the Kilgen Pipe Organ company show in 1928 they sold a small organ to the Wade Theatre in Morehead City NC for $3,155. It included a double roll player so a trained musician wouldn’t necessarily need to be on staff. The Kilgen records do not give an address and sometimes, the name of the theatre is incorrectly given. Sometimes the theatre owner’s name is used.

A look at the Sanborn Map for Morehead City from 1913 shows a theatre on Arendell Street right across from the train station. It is between 7th and 8th streets, but the addresses given are suspiciously inconsistent. On the same block, but facing the other direction is a business owned by B.D.Wade and Sons.

Could the Palace / City / Morehead theatre have been owned by the Wade family at one point? Or possible have been named Wade? Or was this another theatre entirely?

The organ most likely went to this theater, the Palace/Wade/City. The wade family did have a connection to Morehead City theaters, as in 1936 Duffy and Francis Wade built a house called the Royal Theatre (The Beaufort News, January 26, 1936.) the Morehead Theatre, according to NightHawk1’s earlier comment, wasn’t built until 1954.