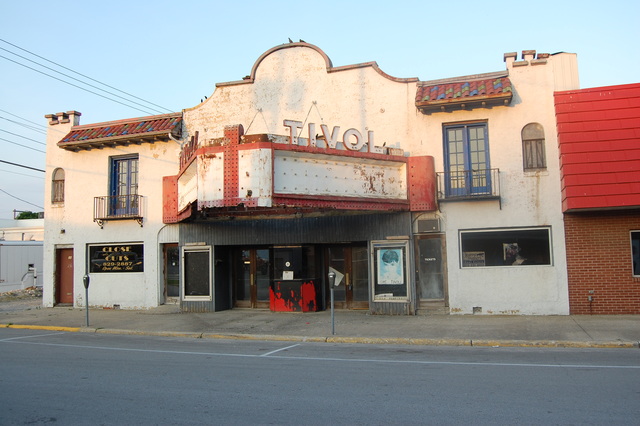 The 1,200-seat Tivoli Theatre was opened on New Year’s Eve, 1928, with the world premiere of “Shopworn Angel” starring Gary Cooper & Nancy Carroll. It was built for local artist Ernest Moore Viquesney, and designed by architect Horam Callender, Jr. The theatre is situated on Spencer’s Courthouse Square.

The Tivoli Theatre’s exterior was designed in Mission Revival style, and featured an Atmospheric style auditorium, created to resemble a Spanish courtyard. Above, a night ‘sky’ was sprinkled with twinkling ‘stars’.

In the foyer, a statue of two children playing musical instruments was created by Viquesney himself. The ticket booth was lined with marble and the facade was of white stucco with green trim.

Not only did the Tivoli Theatre draw crowds from Spencer, but from several neighboring communities, as well, and not only featured movies, but for many years, live stage shows and concerts as well.

By 1950 it was operated by Alliance Theaters Inc. of Indianapolis, IN. In its last couple decades of operation, the Tivoli Theatre lost much of the magic of its early days, and became a bit worse for the wear. It was closed suddenly in May 1999, and then sat vacant.

In around 2001, a group called Friends of the Tivoli was created to explore the possibility of rescuing the old landmark from further decay. The group estimated it would cost over a million dollars just for restoring the Tivoli Theatre, much less purchasing the theater and operating it.

In August 2012, restoration of the Tivoli Theatre began, funded by the Cook Group to look very near the way it did when it first opened on December 31, 1928.

The restored Tivoli Theatre reopened on April 11, 2013 with a black tie gala. On April 12, 2013, the first film to be screened in the building in almost 14 years was James Franco in “Oz The Great and Powerful”.

This theatre was severely damaged by a fire in 1985 and was in 2005 slated for demolition,however earlier this year the three people who were fighting to save the Tivoli,bought the theatre and will be restoring it.

Someone has started a web site about the Tivoli here. It’s set up as a weblog, but so far it has only two entries, both of them being articles from Boxoffice Magazine. There are a couple of photos, and also an e-mail address and a phone number.

From BOXOFFICE 1985, The Tivoli theatre has closed down until there is legal determination as to whether the owner will be put in jail for allowing Minors to see the R-rated film “THE TEACHERS”.

The Historic Properties real estate site lists The Tivoli as being for sale at $55,000. I have emailed the agent in an effort to determine if the listing is current, I haven’t received a reply.

This theater is apparently going to be restored. View link

This weblog post about the Tivoli Theatre in Spencer has photos showing the auditorium before and after the restoration.

The Tivoli’s history page includes some photos inside and out.