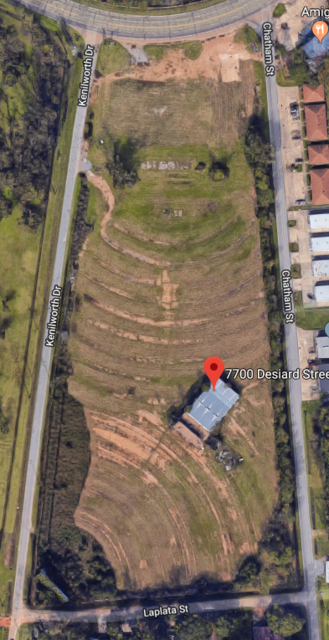 Opened in 1947 as the Eastgate Drive-In. By 1955 it had been renamed Joy Drive-In operated by the Joy Theatres chain and was listed with a 500 car capacity.

In the early-1970’s it was twinned and became the Showtown Twin Drive-In. The drive-in could accomodate 600 cars. It was initially operated by Gulf States Theatres followed by Gulf International Cinemas. The drive-In closed in the mid to late-1980’s.

The drive-in at this location is visible in an aerial photo from 1949, and on a topo map from 1947. The 1955 Film Daily Yearbook lists two drive-ins for Monroe, Louisiana, the Joy Drive-In and the Leo Drive-In. More research is needed to determine exactly which name this drive-in went under, during what years, and how early it opened.

Another drive-in on the southside of Monroe is visible in 1949 and 1956 aerial photos, and was located at the intersection of Jackson Street and Buckhorn Bend Road, in the northwest corner. This other drive-in was much more short-lived than the Showtown Drive-In, as it was not visible anymore in the 1969 aerial photos. Another drive-in, the Star, was located relatively nearby in West Monroe, across the river, and closed in the late 1960s when I-20 was built over it.

the ramps concession stand one of the screens still remain!