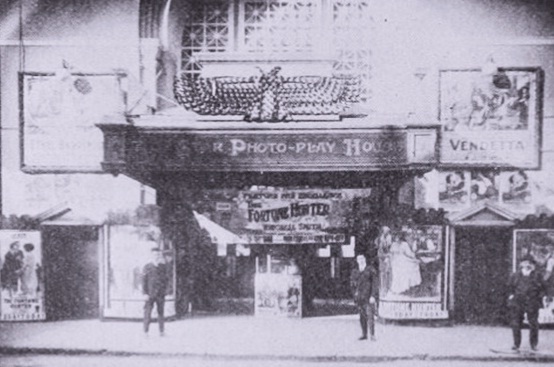 Opened on October 21, 1907 as the Victory Theatre, this house in the Western Addition was part of the theater district that thrived for a few years after the fire of 1906, before the theaters in downtown San Francisco were rebuilt. In its early years it presented vaudeville, and was the second theatre to be managed by Isadore Coleman Levey (his first being the Columbia Theatre, Oakland) He went on to manage a number of theatres in the bay area and organized (as a theatrical agent) for vaudeville shows in collaboration with his son Bert Levey. They owned the Columbia Theatre, Oakland, the Victory Theatre, Alcazar Theatre, Princess Theatre & Garrick Theatre all in San Francisco, the Republic Theatre, Vallejo and the Sequioa Theatre, Sacramento. but it eventually became a neighborhood movie house.

The building, with its enormous Classical pediment, stylized Roman arch entrance, and Mannerist decorative details, has since been demolished.

Here is a photo of the Victory Theatre dated 1909.

I came up with an earlier opening date, October 21, 1907. the Victory Theatre was the second theatre to be manage by Isadore Coleman Levey (his first was the Columbia Theatre in Oakland). He went on to manage a number of theatres in the bay area and organized (theatrical agent) for vaudeville shows in collaboration with his son Bert Levey. (manager of Princess, Garrick, Alcazar Theatres, the Republic Theatre in Vallejo and Sequoia Theatre in Sacramento).

On the picture posted by Joe Vogel, the men on the right is my wife’s great great grandfather Isadore Coleman Levey. I wonder if somebody could help me in my research about Isidore and Bert Levey.