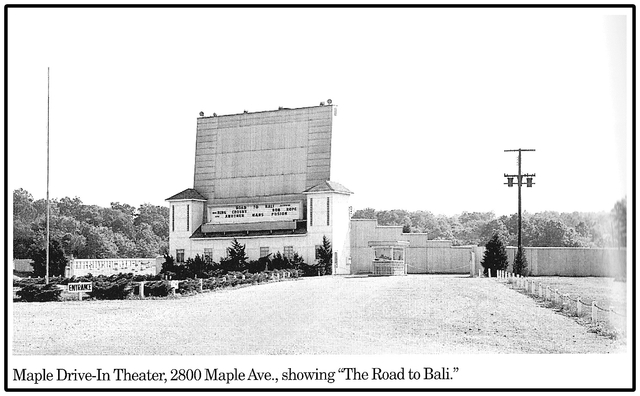 The Maple Drive-In opened on May 5, 1949, screening the 1948 comedy/musical “Romance on the High Seas” with Jack Carson, Janice Paige and Doris Day. It was advertised as “Zanesville Finest Open-Air Theatre” and was opened by Erma & Harold Boedecker (dba Maple Theatre Inc.). He had interests in drive-in theatres in Muncie & Terre Haute, IN, (Terre Haute Drive-In) before he built the Maple Drive-In. Harold wanted to build his own drive-in theatre so he did some searching and found Zanesville, OH to be the perfect place to build one. The Maple Drive-In was built at a cost of $100,000 with a wooden screen tower that was 48 ft x 50 ft screen. It was widened in March of 1955 with wings for screening CinemaScope movies. It had a car capacity of 500 cars with RCA in-a-car speakers. The first projectionist was Maxie Washburn who remained at the theatre until 1978. The projection booth featured Brenkert 60 projectors with carbon arc lamps and tube amplifiers. In 2019, John Williamson recalled the Maple Drive-In was a first class drive-in with space to accommodate around 500 cars, a seating area, lite speakers and a total RCA booth. “I served both the Maple Drive-In and the Skyway Drive-In. It had massive Ashcraft Super Core-Lite lamps burning 13.6mm carbons, RCA/Brenkert BX-100 projectors and RCA sound”.

Boedecker operated the drive-in until 1955. Starting in 1956, the Maple Drive-In was leased to Nate & Sam Schultz (dba Nancee Drive-In Inc. and Selected Theatres , Cleveland, OH). Over the years Selected Theatres operated by Nate, Sam, Jay and Don Schultz owned and operated a lot of indoor and drive-in theatres over the years. With Selected Theatres the new lesee, the drive-in had a new theatre manager, Kenneth L. Smith. Smith stayed until 1963 when Roger Angles became the new theatre manager. In 1964, the Maple Drive-In changed its seasonal operating schedule to 7-days a week during the summer months and Friday, Saturday & Sunday during the winter months. I did not see anything mentioned about electric in-a-car heaters, but they did give out gas coupons when you entered the theatre in 1973. In June of 1973, Harold W. Boeddecker died, so his son Harry Boedecker was the new owner of the Maple Drive-In.

In October of 1979, the county prosecuting attorney filed a complaint in Muskingum County Common Pleas Court asking that the Maple Drive-In and the Skyway Drive-In theatres be declared public nuisances. The county prosecutor, Richard E. Bridwell, accused both drive-ins of screening “R” & “X” movies that were visible to the residents and the general public. The defendant for the Maple Drive-In was Harry F. Boedecker, owner, and the defendants for the Skyway Drive-In were Helen L. Huprich, Anthony & Frances L. LaMonica, owners, also the lessee of both drive-in theatres was Selected Theatres Co. (dba Nancee Drive-In Inc.). Roger Angles was supervising manager for both theatres and Jay M. Schultz of Selected Theatres Management Corp.

Bridewell alleges that the displays of obscene motion pictures at the Skyway Drive-In were clearly visible from Maysville High School at night during football games and other night time school activities. He also cites examples of juveniles within the confines of the Skyway Drive-In during the screening of “R” & “X” rated films being apprehended by the Muskingum County Sheriff’s Department. He also asked for a preliminary injunction to be issued restraining the defendants from showing the alleged obscene films and take adequate safeguards to use some type of barrier that would prohibit persons outside the theatres from viewing the films. In July of 1980, the charges were dropped by the Muskingum County Common Pleas Judge J. Lincoln Knapp. The films in question that were seized at that time had not been established that the films were obscene to begin with.

In 1982, Selected Theatres sold off all their theatre properties and got out of the theatre business. The Maple Drive-In & the Skyway Drive-In were leased out to Steve Prince (dba Royal Entertainment Inc. (REI)). Roger Angles was named manager for both theatres. Angles said the goal of the new ownership is to bring families back to the drive-ins. Angles said “G”, “PG” & R-rated films will be screened at the theatres adding the the R-rated films shown will not be of a pornographic nature. RIS is planning on operating the concession stand in-house. Selected Theatres always contracted out the concession stands. Unfortunately the drive-in business did not pick up so the Maple Drive-In screened its last movie on September 2, 1984 with Jennifer Beals in “Flashdance” & Kevin Bacon in “Footloose”. The original wooden screen tower along with the rest of the drive-in was demolished. “Zanesville Finest Open-Air Theatre” is no more. It is now the Genesis Healthplex building.