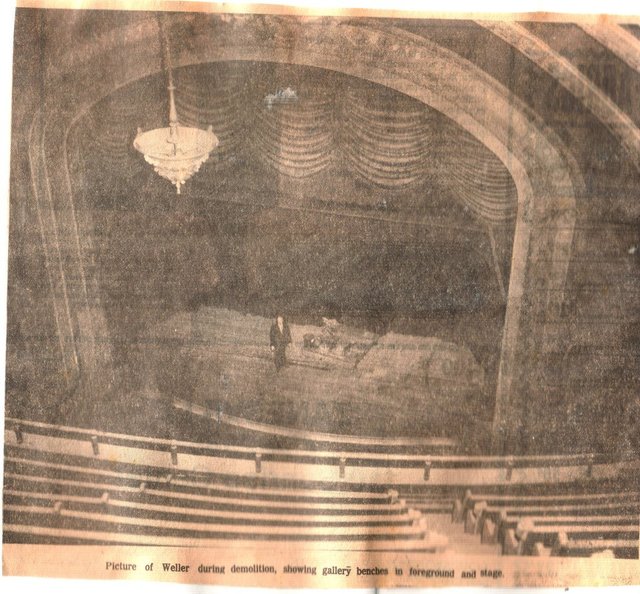 Opened April 27, 1903, by Samual A. Weller who also operated the famous Weller Pottery in Zanesville. The opening production was the comic opera “When Johnny Comes Marching Home”. The stage curtain was designed by Cincinnati artist John Rettig. The theatre was used for movies and live performances. Seating was three levels. I found capacity listed as 1,700 and 1,300. In later years the gallery, 3rd level, was not open and probably accounts for the difference in seating.

In 1933 it was taken over by Shea Theaters, who also had the State Theatre(aka Quimby Theatre, Cinema 1) and Liberty Theatre in Zanesville. The theatre closed on December 9, 1962 with Steve McQueen in “The War Lover” & Bob Monkhouse in “A Weekend With Lulu”. The beautiful Weller Building was demolished in august-December 1963.

A 1905 book called Past and Present of the City of Zanesville and Muskingham County, Ohio, by J. Hope Sutor, says that the Weller Theatre was designed by Columbus, Ohio, architect Frederick Elliot in association with local architect Harry C. Meyer. The opening date was April 27, 1903. The opening night featured the operatic musical “When Johnny Comes Marching Home”, produced on Broadway in 1902 by F. C. Whitney. The book doesn’t specify, but this was probably the Whitney Opera Company’s own road show version of the production.

The Weller Theatre was decorated by artist Alfred Ronchetti, a recent immigrant from Switzerland who, in 1904, returned to Zanesville to establish himself as the town’s leading decorator.

By 1928, the Weller Theatre was controlled by Caldwell Brown, who also had the Liberty and Grand Theatres. The July 17, 1928, issue of The Film Daily reported that Brown had acquired control of the Imperial Theatres Company, operating the Imperial, Quimby, and Shultz Theatres in Zanesville.

The Shea circuit took over operation of the Weller Theatre in 1933. The announcement of the transfer of the house from the Caldwell Brown circuit to M. A. Shea appeared in the July 28 issue of The Film Daily.

The August 8 issue of The Film Daily ran this announcement about Shea’s plans for the Weller Theatre:

“Zanesville, O. — M. A. Shea, lessee of the Weller, has retained Harry Holbrook, Columbus theatrical architect, to draft remodeling plans for the house, which will open with pictures and vaudeville early in September.”

The April 25, 1941, issue of The Film Daily reported that Shea Theatres, operators of the Weller Theatre, had taken over Zanesville’s other four movie houses: The Quimby, the Imperial, the New Liberty, and the Grand.

I have a large weller light fixture my father left me. He took it on antique road show and was told it came from the theatre. Would like to find out more about it.

Pottery magnate S.A. Weller launched the theatre on April 27, 1903 on a thirty year lease. In 1933, M.S. Shea Circuit took on the theatre on a new 30-year lease. The theatre closed as the lease was ending on December 9, 1962 with “The War Lover” and “Week-End with Lulu.” The Weller was demolished beginning in August and ending in December of 1963. The first film played October 21, 1905 with Edison films. But regular films didn’t commence until 1913 sharing with vaudeville.