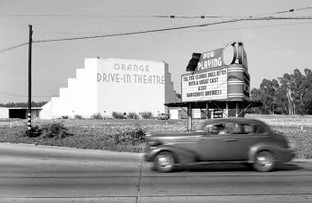 The Orange Drive-In opened in June 19, 1941 with Frank Morgan in “Keeping Company” & Deanna Durbin in “Nice Girl”. It was located among the orange groves on Highway 101 and Placentia Avenue. This was when nearby Los Angeles just had a few drive-ins itself including its first, the Pico Drive-In. Movie advertisements in the Santa Ana Army Air Base newspaper show that it was just called “Drive-In.”

This was probably the first exposure to the early Southern California drive-in culture to thousands of soldiers who swarmed to the air base from every state.

In 1955, by the time Disneyland opened two miles away, the Santa Ana Freeway had replaced Highway 101 and Placentia Avenue had become State College Boulevard. From 1955 to 1961 Dr. Robert Schuller held Sunday morning services here, preaching to the cars from the roof of the snack bar.

Orange County would go on to have at its peak in the 1970’s with 11 drive-ins mostly managed, like this one, by Pacific Theatres. In 1969 and the early-1970’s the drive-in received some competition when Syufy (now Century) Theatres came into Orange and built a 4-screen drive-in two miles away and the 70mm-equipped indoor Cinedome on property adjacent to the Orange Drive-In. About this time the Orange Drive-In added a second screen.

The Orange Drive-In ran Spanish-language movies in its later days and closed on September 28, 1994 but continued to operate its traditional swap meet, which had been going on since the middle 1970’s.

Many budding entrepreneurs who would later to go on to build their own retail stores and companies got their start at this swap meet.

Its screens were torn down in March 1997 to make an off-ramp for the widening of the freeway. In 2003 all that remained were the old snack bar, the swap meet and plans to erect apartments on the site.

I would pass by this drive-in on the way to the formal Anaheim Stadium.

Love the Orange Drive-in. Its screen boasted the biggest orange in Orange County! Now pretty much all of the oranges in OC are gone, including the Big O. Too bad.

Dr. FRANK LAUBACH, famed international Christian missionary, will be speaking in person in Southern California this Sunday morning at 11 a.m. in the Orange Church on the Santa Ana Freeway, 2 miles below Disneyland. Norman Vincent Peale has described Dr. Laubach as “one of the 10 greatest persons alive in the world today.” The Orange Church meets in the Orange Drive-In Theater where even the handicapped, hard of hearing, aged and infirm can see and hear the entire service without leaving their family car.

For an old pic: View link

Scroll down to Thursday March 27

Was mentioned in the documentary “Drive-In Movie Memories” in 2001.

A photo on the back of No Doubt’s Tragic Kingdom album has a good picture of the band standing in front of one of the screens at the Orange Drive-In.

I remember leaving Angel games and while walking down the ramps craning my neck to see what movies were playing.. I recall Jurassic park…

I wonder if this is the same drive in that I would see movies playing from the 5 freeway? When my family would drive from San Diego to L.A.

I had a shop adjacent to the drive in and could see movies from the roof, but no sound of course.