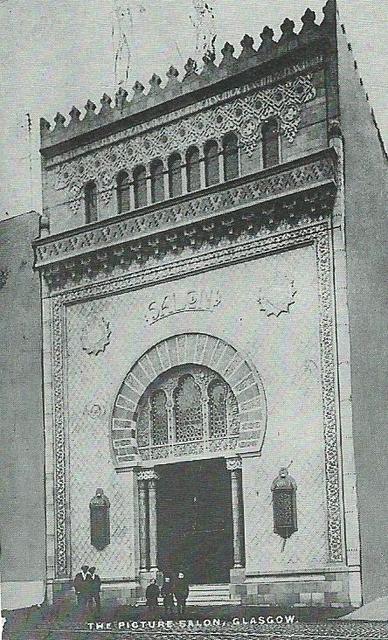 In Glasgow city centre the Salon Cinema opened in June 1913. It was structurally innovative, being built on ferroconcrete frames, to give greater resistance to fire. Its extraordinary exterior comprised a tall frontage clad entirely in brightly-coloured glazed tiles in a flamboyant Moorish style. The auditorium had a large, comfortable balcony and the considerable space above the cinema was occupied by a luxurious cafe and restaurant, two floors high, with tiered seating around the upper level. The interior was bedecked with plaster medallions and scrollwork and the restaurant had an elaborate glazed roof and wealth of foliage to suggest a winter garden. A lift was installed to encourage the public to make the long ascent from street level. It was advertised as Picture Salon, Winter Garden and Tea Lounge.

However the cinema operation appears to have failed fairly quickly and it closed in May 1923. Though the structure remains, none of the Moorish decoration has survived. In December 1998, when my photograph was taken, the rather nondescript façade was home to shops on the ground floor, a Chinese restaurant and, in the old cinema area, Victoria’s Nightclub. It suffered a major fire on March 22, 2018 and was demolished on April 5, 2018.