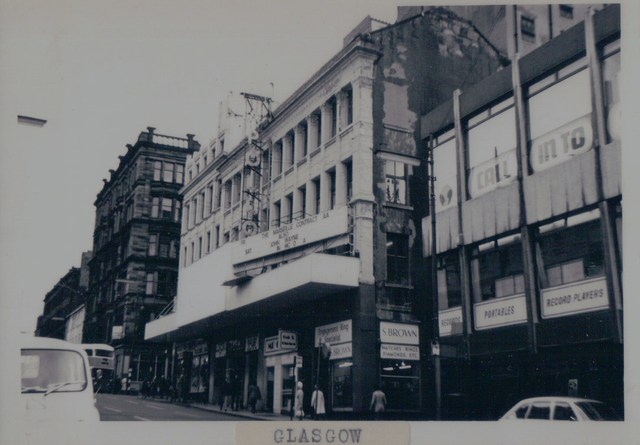 Built in 1927 by Bert and Fred Green, this vast cinema was the biggest in Europe and certainly the biggest cinema to be built in the United Kingdom. Built by the Cinema Building Company it opened as Green’s Playhouse on the 15th September 1927 with “Play Safe” starring Monty Banks. It was designed purely as a cinema to screen films, and had 47 feet wide proscenium, and a very small stage which was only 16 feet deep. The projection box was located in the front underside of the balcony.

Because Glasgow was also dance crazy in these days, a 3,000 capacity ballroom was also built into the building on top of the main auditorium. There were 3 cafes which held a total of 1,400 diners, plus waiting rooms which could acommodate 1,300. Legend has it that spread throughout the cinema, ballroom, cafes and lobby areas were somewhere in the region of 10,000 people!

The Playhouse was also the first to show talkies to the Glasgow audience and it became an iconic venue in Glasgow for many.

By the late-1960’s though, they were struggling to fill its vast space and it became increasingly used for rock concerts but even this failed to stop it closing in 1973 when the final film “King Boxer” was screened on 30th June 1973.

A quick lick of paint round its interior though saw the Playhouse resurface as the Apollo Theatre - and between then, despite a few changes of ownership it survived on an increasingly shaky peg. Among the artists who appeared in the days of the Apollo Theatre were: Shirley Bassey, Diana Ross, The Who, Status Quo, Tina Turner and Paul McCartney. Local comedian Billy Connolly filled the vast auditorium on several occasions. The Apollo Theatre closed on 16th June 1985 with a concert by Paul Weller and Style Council. When the show ended fans stripped the building of ‘souvenirs’ and it was boarded up.

Speculation continued for a few years that somehow this magnificent movie palace would be saved but following structural problems the lobby and rear parts of the building were demolished in September 1987, leaving the main auditorium only intact with still the hint that somehow it might survive. A strange fire in the old ballroom on top of the building ended once and for all any hope, and it was razed to the ground in late-1988-January 1989.

This cinema is better known by it’s original name of Green’s Playhouse. A more detailed history, including extensive galleries of the interior after closure and during demolition, can be found here: