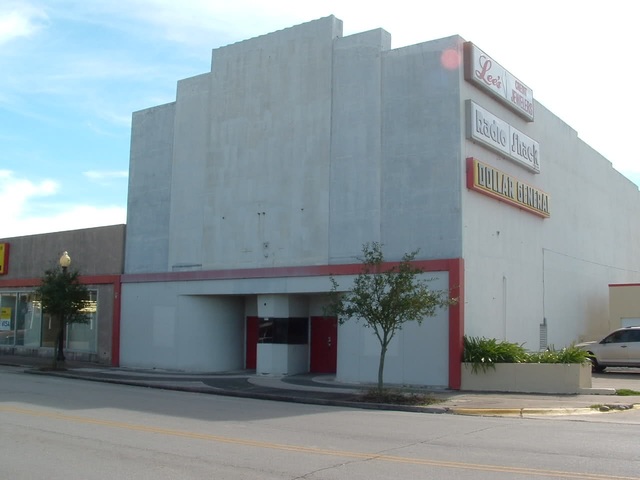 The Showboat Theatre opened in 1942, and closed around 1970 and went into retail use. It was demolished in March 2016.

A Google Books snippet view of the listing of architect Ernest Shult in the 1949-50 theatre catalog confirms that Shult designed the Showboat Theatres in Freeport (1942) and Texas City (1941.)

Also, a snippet of a March, 1939, issue of Daily Bulletin of the Manufacturers Record shows an item saying that Ernest Shult had drawn the plans for a $25,000 theater and store building at West Columbia, Texas, for Alex Sanbourne.

Thanks! My daughter goes to Texas Tech University, and Worldcat tells me that they have a copy in reference. I’m going to have her check for me. But thanks so much for the tip about the Freeport Showboat.

Well, high wind and rain finally weakened the old girl to the point where the roof and east wall fell on the neighboring building below. As of Monday, March 21, 2016, the Showboat Theatre is being demolished.

Another theater building lost to neglect. Googling for news reports about the event (but finding none) I came across this page at a site called arch-ive.org (apparently not related to archive.org) which features three photos of the closed Showboat and a 1943 Sanborn map showing its site. Judging from the first photo, the birds of Freeport have lost a splendid communal perch.

Yes, arch-ive.org is run by a good friend of mine. Those are her photos from a trip to Freeport.