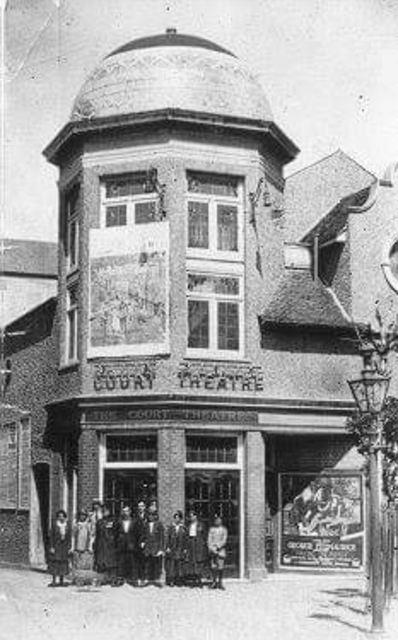 Located in Berkhamsted, Hertfordshire. The 700-seat Court Theatre opened of the 24th March, 1917, the name inspired by The Inns of Court Officer Training Corps, then stationed in the town. It was designed in a Moorish style.

The cinema passed to the Shipman and King circuit in March, 1930, who reconstructed and enlarged the Court Cinema up to 1,000 seats, during 1934. The Art Deco style cinema was designed by A. Belcham of architectural firm Howis & Belcham with the decorative treatment provided by interior designers Mollo & Egan. A Christie 3 manual 6 ranks organ with illuminated console was added. The stage held more stage shows into the World War II period, after the Rex Cinema opened. The organ was removed to S & K’s new Embassy Cinema, Waltham Cross in 1937.

The Court Cinema closed on the 11th June, 1960 with John Wayne in “The Horse Soldiers”. It was converted into a Tesco supermarket, which was badly damaged by fire in 1969. A larger Tesco supermarket now stands on the site.

The interior decoration for the improved cinemas was by Mollo & Egan, using a similar design to that used at the Embassy-Braintree, Regent-Horley & the Majestic-Reigate. This was the underwater theme with fish swimming amongst seaweed.

The very first Mollo & Egan Marine panel was installed in the Princess Theatre Dagenham which opened 8th October 1932 with similar panels continuing in other cinema interiors until 1936.