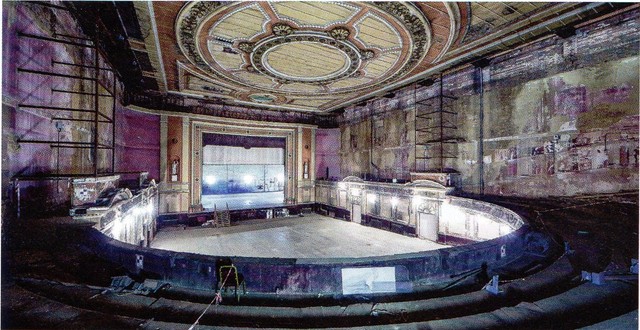 Located on Muswell Hill in north London, between Muswell Hill and Wood Green. The first Alexandra Palace was opened on 24th May 1873. It was a ‘Palace for the People’ to become north London’s equivalent of south London’s Crystal Palace, and offered spectacular views over the London landscape. It was named after Princess Alexandra and was built by the Lucas Brothers, who also built the Royal Albert Hall in London’s South Kensington district. They hired architects Alfred Meeson & John Johnson to design the entertainment complex. It was a resounding success, but just 16 days after opening, it was destroyed by fire on 9th June 1873, which also destroyed many priceless artefact’s, paintings and porcelain that were on display.

Set amid 220 acres of parkland, the Alexandra Palace building covered a seven and a half acres site, and it was rebuilt to the plans of architect John Johnson and opened on 1st May 1875. The new building had a great hall, capable of accommodation 10,000, which was equipped with a gigantic Willis organ. There was also a concert hall, a 3,000-seat theatre, a palm court containing exotic plants and trees, an enclosed rose garden courtyard and in the parkland a boating lake, three ornamental pools, a race course and a circus. Alexandra Palace had its own railway station and there was also a tram to take the ten’s of thousands of visitors up to the top of the hill. In 1914 Alexandra Palace and its grounds were used as a refugee camp for Belgian citizens fleeing the Germans. Later that year it became an internment camp for 3,000 German, Hungarian & Austrian prisoners of war. The complex re-opened to the public after World War I, and later added to its attractions an ice rink, cafe’s and bars.

The 3,000-seat Alexandra Palace Theatre which is the subject of this page, had seating provided in orchestra, dress circle and upper balcony levels. It presented mainly music hall, and pantomimes, and there is elaborate wooden stage machinery under the stage which was used for special effects. In 1901, films were introduced as part of the programming. Fred Karno’s Company appeared in May 1902 and famous stage actors and actress’s such as Dame Ellen Terry & Sir Herbert Beerbohm Tree trod the boards. The theatre was closed for almost two years from 1907 as it was deemed unsafe (due to cinematic use and a lack of fire exits), and during this time the upper balcony seating area was removed, reducing the seating capacity by a half to 1,500. A fireproof purpose built projection box was built at the rear of the dress circle, and at the end of 1908, it had reopened as a cinema, named Electric Theatre. It operated as a cinema until the outbreak of World War I in 1914, when as stated above the building and grounds were requisitioned to be used as a prisoner of war internment facility. Films were screened for the internees. In 1922 the Alexandra Palace Theatre was taken over by Macqueen Pope and was refurbished to became a live playhouse theatre. It was not a great success and by 1926 films were again being screened. Archie Pitt, husband of Gracie Fields, took over the management of the theatre which he used as a tryout for his productions of musical shows starring Gracie Fields, “The Show’s The Thing” being one of many. It was again closed at the outbreak of World War II in September 1939. It remained shuttered to the public, apart from a day in June 2003, when the Cinema Theatre Association presented a programme of silent films, with piano accompaniment. It was also used for a couple of electronic organ concerts. It is a Grade II Listed building, and in 2015 renovations began to restore the theatre back into theatrical use.

In the meantime, back to 1936, when the BBC took over the south-eastern section of the Alexandra Palace building and converted it into a BBC Television Studio. A broadcasting antenna was installed on top of the building and it televised the world’s first public television broadcast on 2nd November 1936. These broadcasts were halted due to outbreak of World War II in September 1939 halfway through a broadcast of a Micky Mouse cartoon, and resumed after the war, commencing with a broadcast of that same Micky Mouse cartoon! The BBC used the old disused Alexandra Theatre for storing scenery into the early-1980’s, when broadcasting from the BBC studio ended.

The Alexandra Palace building suffered another major fire in June 1980, which all but destroyed the Great Hall and other sections on the western side of the complex, but the theatre and BBC studios section were saved. The entire Alexandra Palace complex is currently under a long term refurbishment and renovation programme. In March 2015 Lottery funding of £18.85-million was secured to restore the theatre for use as a 1,300-seat performing arts centre, which will include films, and create a Museum of Television in the former BBC studios space. Another £6.8-million was contributed from Haringey Council who own the building. Renovation/restorations were completed in time for a sold out concert by pop group New Order on 9th November 2018, seeing its first audience since September 1939! The theatre officially re-opened on 1st December 2018. Current seating capacity for theatre performances is 916 seats in stalls and circle. For a standing only presentations the capacity is 1,376 and for use as a banquet hall 300.

The Alexandra Palace complex of buildings are Listed Grede II by Heritage England. They consist of the Great Hall, a Theatre, an Ice Skating Rink, a Palm Court and a Bar.

Photos of the interior taken in 2013

The theatre is being restored. You can see inside it – as it was when abandoned around a hundred years ago and now as it’s being restored – on the Friends of the Theatre video page: https://www.youtube.com/edit?o=U&video_id=IDM71tqq37U