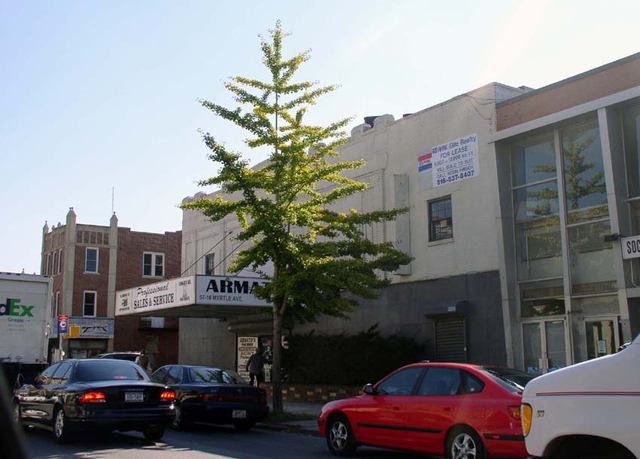 Another long gone neighborhood house in the Glendale area of Queens. Up until the 1980’s this was a catering hall (The Victorian House), and was a very popular spot. Now the space is divided up into a photo studio, senior center and bank. By September 2014 it wasoperating as a Foodmarkets store. At the very top of the building the ACME name is still etched into the concrete.

There were boarded up windows according to my photos from Oct 6, 2004 (posted above), so they probably just opened them, and put new windows in.

I also remember a church, Victory House, at the Acme in the latter 1980’s, its name apparently based on its predecessor, Victorian House Caterers. I have never been inside the supermarket that is there now, though.

Yes, it was a church for a while apparently, perhaps since the name was so close, I didn’t notice. I heard it was some sort of Pentecostal congregation.
The supermarket only opened over the last two months or so, so it hasn’t been that long….I posted a photo of the Met supermarket up above….

[from Greek akme highest point of perfection or achievement] The canonical supplier of bizarre, elaborate, and non-functional gadgetry â€" where Rube Goldberg and Heath Robinson (two cartoonists who specialized in elaborate contraptions) shop. The name has been humorously expanded as A (or American) Company Making Everything. (In fact, Acme was a real brand sold from Sears Roebuck catalogs in the early 1900s.) Describing some X as an â€œAcme Xâ€ either means â€œThis is insanely greatâ€, or, more likely, â€œThis looks insanely great on paper, but in practice it’s really easy to shoot yourself in the foot with it.â€ Compare pistol.

This term, specially cherished by American hackers and explained here for the benefit of our overseas brethren, comes from the Warner Brothers' series of â€œRoad-runnerâ€ cartoons. In these cartoons, the famished Wile E. Coyote was forever attempting to catch up with, trap, and eat the Road-runner. His attempts usually involved one or more high-technology Rube Goldberg devices â€" rocket jetpacks, catapults, magnetic traps, high-powered slingshots, etc. These were usually delivered in large wooden crates labeled prominently with the Acme name â€" which, probably not by coincidence, was the trade name of a peg bar system for superimposing animation cels used by cartoonists since forever. Acme devices invariably malfunctioned in improbable and violent ways.

The Acme was also known as “The Itch”.

Haha, I think a lot of run down theaters were called “The Itch”!

I noticed today a small theater along Myrtle Avenue. It still has the marquee but it is some kind of computer repair business.

Sometimes the label seemed inappropriate. I remember reading a posting about one theatre that was known as “The Itch” in less than six months of it’s opening.