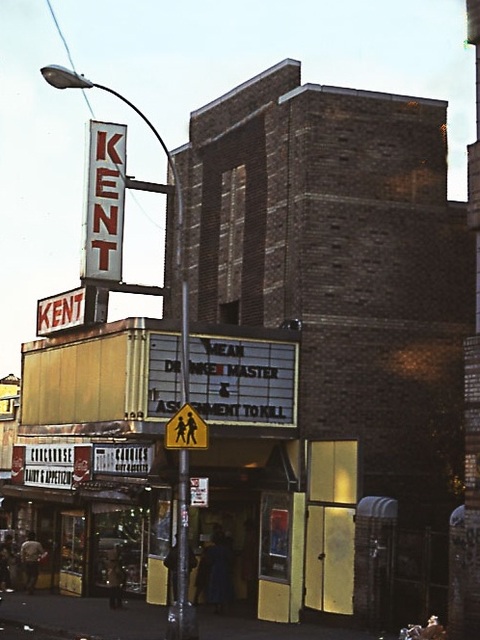 Not to be confused with the same named theatre in Brooklyn, this Kent Theatre was opened in 1936. It was a Bronx double feature house that was still open in the early-1990’s.

The first movie I ever saw was at the Kent — I think. I could be wrong, because I was only about 4 at the time, but I know the movie was “The Mouse That Roared” with Peter Sellers, and at the time we lived several blocks down the hill, off E. 167th St. And I know I did see other movies there, but I’ve forgotten what they were. The theater could be seen out of our sixth-floor apartment window. I have no recollection of the inside of the place, but after seeing the photos linked to above, I was brought right back to my childhood, and that distinctive narrow art deco facade.

Very Cool photo’s. Perhaps someone else knows about a Star theatre.

I believe that page at Forgotten NY was from several years ago. Kevin is usually pretty accurate, but he could have made a mistake. I’ll e-mail him and see if he remembers where he got that Star info.

Google must had a very small budget for these photographers. Half the time they shoot directly into the sun, or they stand behind a bus that completely blocks the shot. Anyway, here are some photos from the site:
http://tinyurl.com/6a9xdc
http://tinyurl.com/658w3s

This was my neighborhood theatre to catch American-International films. Yeah, saw all the Beach Party films here. RIP Annette!

I was inside the 99-cent store yesterday, while I was walking the Concourse, photographing Art Deco apartment buildings. As soon as I spotted the facade, I knew it had been a theater, which I confirmed when I saw the auditorium side, on Sheridan Avenue. I took pictures, including the ceiling of the auditorium, which I’ll post here later today. Tiny; I can’t imagine it being twinned!