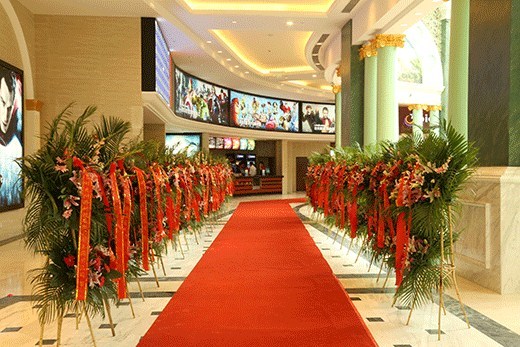 The Premiere International Cinema was designed by US based 5G Studio and is located on the 7th and 8th floor of the Zendai Himalayas Center. The cinema was developed by Entertainment Properties Trust of Kansas City and Shanghai Film Group. The Zendai Himalayas Center was designed by the world-renowned Japanese architect Arata Isozaki and completed in 2010.

According to Mike Voegtle of 5G Studio, their work in China has been so successful that they are planning on opening a design studio there (they currently have two offices in Vietnam). Mr. Voegtle recently predicted in Film Journal International that “The building boom will absolutely go on. With film restrictions relaxing and Chinese domestic films now competing with Hollywood standards, the future of cinema and the demand for new theatre technologies and contemporary venues will continue to evolve and grow.”

When will China’s thousands of cinemas be permitted to re-open? Discussion can be read here