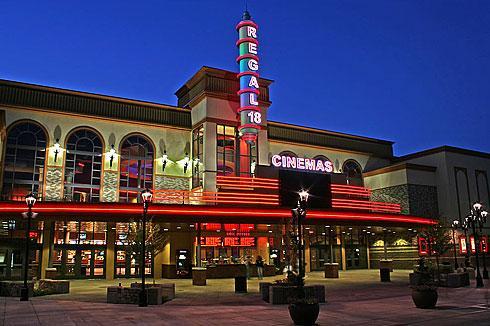 The Bridgeport Village Stadium opened in June 19, 2005. The theater amenities include mobile ticket ordering, a party and a game room. For the hearing impaired, they have listening devices.

The Portland Oregonian noted that to unveil its new IMAX screen on May 3, 2007, there was a midnight showing of “Spiderman 3".

There are three exterior photos of the Bridgeport Stadium 18 on this page of the web site of Robinson Construction Co., builders of the project for Regal Cinemas. The cinema was designed by TVA Architects (formerly Thompson Vaivoda & Associates) of Portland.

Joe, many, many thanks for all of your insightful postings.

These days most new theaters are built by large chains who usually have complete control over the project, and they deal with large architectural firms that provide all of the plans in house, with the theater company paying for them.

Historically, when there were a lot of independent theater operators, it was not unusual for developers to build a theater on speculation and then lease it out to an operator, either an independent or a chain eager to get into that particular market. This has become rare, though. Big chains that dominate the industry today like to maintain control over the look and layout of their theaters, and will typically hire the same architectural firm to design one project after another.