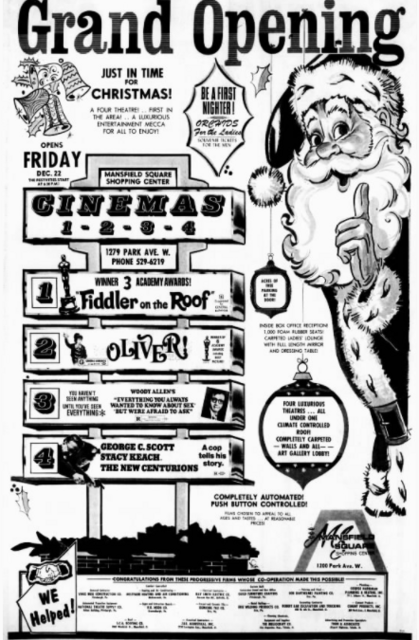 This theatre is closed.

Stern Ohio Theatres Incorporated of Bowling Green, Ohio and Pittsburgh, Pennsylvania opened the Mansfield Square Cinemas 1-2-3-4 on December 22, 1972 with “Fiddler On The Roof” on Screen 1, “Oliver!” On Screen 2, “Everything You Always Wanted To Know About S** But We’re Afraid To Ask” On Screen 3, and “The New Centurions” On Screen 4. Unlike most theaters, this theater had divided on selecting first and second-run films. The first-runs show on 2 screens while the second-runs show on the other 2 screens (I totally do not know if it lasted for a shorter period or not, but I believe that they went all first-run later on, I don’t know yet at the moment). Among its grand opening, a guy dressing up as Santa used a pair of scissors for the ribbon cutting. 2 out of 4 auditoriums had a capacity total of 600.