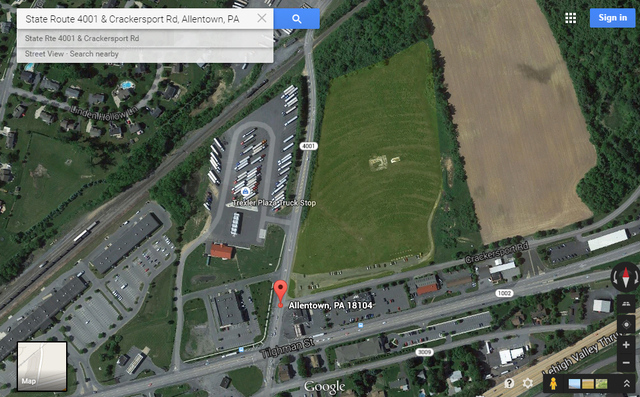 The Super Skyway Drive-In was opened August 14, 1954 with Victor Mature in “Demetrius and the Gladiators”. It was operated by Sol Schocker. The back side of the large Super Skyway Drive-In screen could be easily seen traveling along State Highway 1002 (Tilgham Street) west of Allentown. Older addresses for the theater may have listed it in Kuhnsville, which is a small town just to the west of its location. The drive-in was known for a large concession stand and tasty food.

It was closed by 1957 and after a remodel it reopened June 19, 1965 with Audie Murphy in “Bullet for a Badman” & Ken Scott in “Raiders from Beneath the Sea”. The screen was demolished in the late-1980’s but the locations of the projection booth, concession stand, and parking rows can still be seen today.

Sol Shocker and his Super Skyway Drive-In Theatre Corporation launched the Super Skyway Drive-In in September of 1954. And it was super with 70' screen, stereo sound, and widescreen presentation including CinemaScope. The 1,000 car space ozoner launched with fireworks, a symphonic live music overture, and the film, “Take Me Out to the Ballgame.” The plans called for ice rink, swimming pool, shuffleboard and horseshoe pitching area, and children’s playground. At the close of the abbreviated 1954 season, Shocker sold out to Manos Enterprises though he would stay in a managerial role at the Super Skyway.

This opened on August 14th, 1954. Ad claims that it had the first new outdoor CinemaScope and stereophonic installation in the world.

How did they get stereo sound from the mono speakers at the time?

I got this answer from Film-Tech.com about the stereo speakers:

a lot of drive-ins were designed and built for cinemascope, the field was wired for three channels (left center and right, no surround channel was used ) A standard penthouse was installed and three channel amplification. Eprad made a nice three speaker unit that you placed on the dashboard of your car and it supplied the three channel sound. Drive-ins wanting to save money used standard mag penthouses but blended the three stage channels into the one mono channel. Some indoors did the same thing to save money and still be able to play the mag only soundtracks on the early scope pix. I have a simplex penthouse with a factory ‘4-CH / Mix’ switch built in. As well as a blue colored Eprad 3 speaker unit in my collection.

In addition, you can also see the foundation of the screen right next to the parking area.

The address for this theater is 951 Blue Barn Rd, Allentown, PA 18104. This actually points to the drive in concession foundation.

Billboard, Jan. 15, 1955: “T. M. Mance announces that the Monessen Amusement Company, Inc., of Greensburg, Pa., has bought the controlling interest in the Super Skyway Drive-In of Allentown, described as the first to install Stereophonic sound. It utilizes the Motiograph two-speaker system and will open March 15 with enlarged capacity of 1,000 cars, Manos says, with Sol Shocker remaining as managing director and stockholder of the theater.”