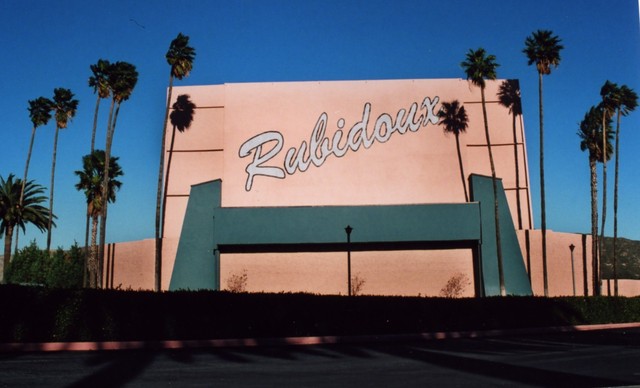 The Rubidoux Drive-In opened November 4, 1948 with John Wayne in “Red River”. It had a capacity for 730 cars. Two new screens and a Sunday swap meet were added in the 1983, and there were plans to add another screen. It is operated by The De Anza Land and Leisure Corp., which also run the Van Buren Drive-In, in nearby Riverside.

These two drive-ins along with the Mission Drive-In in Montclair and Pacific’s Vineland Drive-In in the City of Industry are the four remaining Los Angeles-area drive-ins still showing movies. The Rubidoux Drive-In presents first-run double bills with FM sound in a well-maintained environment which includes a recently remodeled snack bar.

The swap meets have been so successful that they have now been extended to four days. The company has drive-ins and swap meets in other states, including the Redwood Drive-In in Salt Lake City and the Starlight Drive-In in Atlanta.

This from Wikipedia: “As of the 2000 Census, Rubidoux is the largest unincorporated community in the Inland Empire and in Riverside County.”

I worked here in the early nineties, Menace to Society era, interesting crowds.

This drive-in is slated to convert to digital projection in 2013.

The Rubidoux Drive-In was the subject of a two-page article in Boxoffice of February 5, 1949. There are five photos and a floor plan of the concession-rest room building.

Five 1949 photos added courtesy of the Americas Past In Photos Facebook page.

Answering the question of why that name…

Boxoffice, April 24, 1948: “RIVERSIDE, CALIF. – Roy Hunt has announced plans to construct a new drive-in theatre, the Rubidoux, in West Riverside. The house takes its name from Mount Rubidoux, famed as the locale for Easter sunrise services.”

Rubidoux is also the name of that particular area of Riverside.

Using the name Riverside still works to fetch this theater’s location in Google maps, but officially the area is now called Jurupa Valley. Here’s the rather old news from Wikipedia: “On March 8, 2011, voters of Rubidoux and adjoining towns passed Measure A by a 54% ‘Yes’ vote, to incorporate the areas of Mira Loma, Pedley, Rubidoux, Glen Avon, and Sunnyslope into the new city of Jurupa Valley. The effective date of incorporation was July 1, 2011.”

Boxoffice, June 27, 1953: “After a quarter-century in show business with her late husband, Mrs. Roy Hunt has sold her Rubidoux Drive-In near Riverside to the Sero Amusement Co., which takes over the property July 1.”