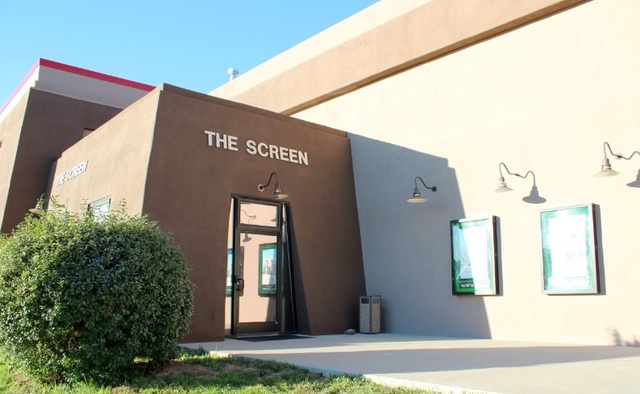 Opened as the Screen at Studio 2 in December 1998 when it had 20 folding chairs. The Screen calls itself “New Mexico’s premiere Cinematheque, showcasing the finest films with the finest projection. Founded at the Santa Fe University of Art and Design and curated by Brent Kliewer, The Screen plays the finest in World, Art, and Independent Cinema".

It now has stadium seating for 165 patrons and both digital and 35mm projection. It was closed April 30, 2018. It was taken over by the Center for Contemporary Arts and reopened in spring of 2019.

which says The Screen will close on April 30th (but the place will remain intact for now in case it gets rescued again and reopened).

“The Screen, originally called the Screen at Studio 2, opened in December 1998 on the campus of what was then the College of Santa Fe. It was financed by New York City-based philanthropists Armand and Celeste Bartos. While The Screen showcased contemporary foreign and American-made art-house and independent films — as well as classic and cult films — for film lovers throughout the community, it also served as an educational venue for College of Santa Fe students.”

The Screen’s official website currently has a goodbye statement:

“Dear Patrons of The Screen:

The Screen will cease operations effective April 30, 2018. The Screen was operated by and founded at the Santa Fe University of Art and Design, which is closing in May 2018. We are proud that The Screen has showcased world, art and independent films since its founding in 1999. In addition to showing films, The Screen also hosted lectures by film makers, cinematographers, actors, and directors. The Screen thanks all of the many patrons, guests and filmmakers for their support throughout our nearly 20-year run."

Glad to hear it has reopened, as verified by a Google search for articles about The Screen in the Santa Fe New Mexican newspaper.

The Center for Contemporary Arts website says they have also been running the CCA Cinematheque at 1050 Old Pecos Trail since 1983, which currently does not have a listing on Cinema Treasures.

Wow, Santa Fe has at least 3 art cinemas, including the Jean Cocteau.

David I trust you will add the additional location?

Robboehm, yes I created a Cinema Treasures page for the CCA Cinematheque yesterday. : )