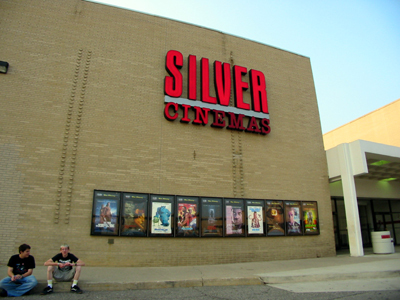 Opened December 22, 1965 as a sister to the Livonia Mall Cinema (now called the American Family Cinemas) by General Cinemas Corporation, the identical Macomb Mall Cinema I & II opened with “The Greatest Story Ever Told” and the bizzare animated children’s movie “Pinocchio in Outer Space”.

I worked for this cinema in the late 80’s and early 90’s when it was run by General Cinema. Also when it was later purchased by Cinemark. Anyone have any pictures?

This theater closed in April 2015:

I used to go to this theater when I lived in Southfield until December 2014 (I now live in Charlotte, Michigan, a small town between Lansing and Battle Creek).

I was shocked when I came back to the Detroit area for a visit with my friend last spring and discovered the Silver Cinemas were closed (a sign on the marquee read, “Closed – It’s been reel”). I guess that was a consequence of the Macomb Mall being remodeled.

Shame that now if I go back to suburban Detroit for a visit, and want to see a movie I missed the first time around, I’ll have to go to that sorry Movies 16 at Universal Mall in Warren; the Silver Cinemas had more class for a second-run theater. But, when I have enough money and want to see anything first-run, it’s good to know the MJR Partridge Creek is still active (I also have an MJR Rewards Card to use there, which is likewise still active).

To be clear, the Gratiot Drive-In remained open for almost 19 years after Cinema I & II made its debut. Your site says the drive-in closed in 1984: http://cinematreasures.org/theaters/12313

I recently discovered the reason this theater closed is because the owners of Macomb Mall annulled their lease with Landmark Theaters, Silver Cinemas' corporate owner, because of the remodeling.

I sent Landmark an e-mail asking them if they will see about returning to the Detroit area and/or establishing a location in the Lansing, Jackson, or Battle Creek areas. They told me they would “send [my] request to the director of development.” Let’s hope they do!

1987 photo added via Roseville Reflections Facebook page. Appears to have already had 4 screens by 87 and not early90s as the Overview states.