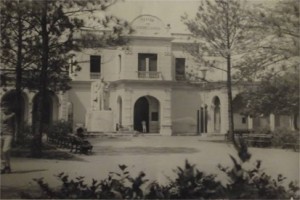 Located in Cruces in the Las Villas province. The Teatro Raul Aparicio is on Calle Padre Las Casas between Heredia and Esquerra. It was built at a cost of $27,000. The Wilfredo Masso Rojas enterprise officially opened it on February 27, 1919. Its initial capacity was 700 seats in the orchestra and 300 seats in the balcony. Its architecture was and eclectic style in two storeys, its façade formed by three bodies, the center one oriented toward the street with a logia and three round arches. On its ground floor classic elements stand out, such as fluted palasters with Ionic capital, the main entrance, frieze and cornice along the full width of the façade. The upper floor has independent balconies for each system and the building is crowned with a beautiful unbroken battlement of (goblet?) pedestals and balustrade, which takes on the shape of a curved pediment in its center where the names of the theatre and year of construction are displayed. In its initial carpentry work semi-circular (skylights?) stand out.

It was closed in 1957 due to deterioration of the installation, only to re-open again, still with very bad conditions, which caused it to be closed in the 1960’s to be repaired. In May 1970 another reopening was possible with the name Raul Gomez Garcia. It has been closed since 2006.

This theater was named after Cruces' native writer Raúl Aparicio Nogales. It is located opposite Martí park.