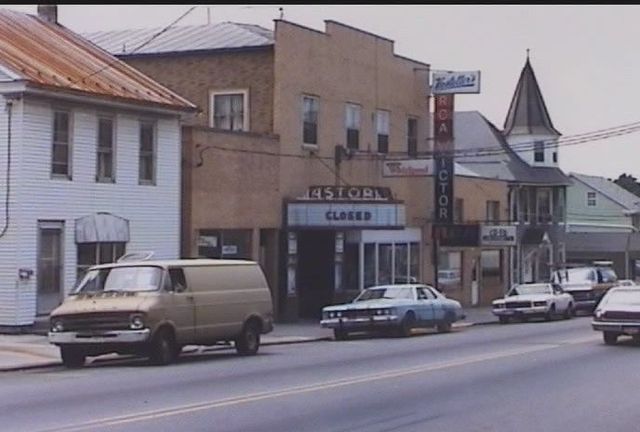 Located in the main business district on E. Main Street, the theatre opened as the Hippodrome Theatre in the early-1900’s. In 1929 it was renamed Astor Theatre when it was expanded.

The Astor Theatre played main stream feature attractions until sometime in the 1970’s when it became an adult house showing X-Rated movies. This created a stir in the community and a bad name for the theatre. It closed sometime in the 1980’s.

After a three year gutting and renovation by the current owner, the theatre reopened as the Allen Theatre on September 21, 1995. Live events along with movies now play the Allen Theatre. There is a fairly good history on their web site.

What a neat little theatre; would love to see inside pictures.Sounds like a top place to catch a flick.

Cool looking theatre,wonder if they need a Manager?

A beautiful theatre inside and out. Glad to see it’s still open. Went to the movies here alot when I lived in the area in the early 2000’s. Nice area too…near Hershey and lot’s of antiquing. Cant ever imagine it being an x rated theater…a very nice community.

I’m in the National Guard and frequent nearby Ft Indiantown Gap often. I never miss the chance to have a sandwich and take in a movie while I’m close. I love the place. I saw “The King’s Speech” there a while back. They had a local musician playing while you waited for the movie, a short about Hershey from the 1950’s was played first and then the main attraction. Both the short and the feature were introduced by a gentleman who came up on the stage and discussed each film. I will never forget the experience!

Hello, I am a Architectural Preservation student at Philadelphia University. I am working on a case study of the Allen Theater. If anyone has any information on the history or where I could find information it would be much appreciated. Thank you!

Theater is for sale. 895 grand. Says owner is retiring.

If the website goes away, here’s copied, the “About the Allen” section- by Natalie Hope McDonald

After three years of total renovation, the Allen Theatre opened its doors in Annville on September 21, 1995.

Located in the heart of the downtown at 36 E. Main Street in Annville, PA 17003, about three and a half miles west of Lebanon and six miles east of Hershey, the Allen Theatre is one of the few single screen movie theatres in Central Pennsylvania specializing in first-run main line as well as art, and foreign films. And while this 322 seat theatre dates back to the early part of the century, little is actually known about the history of the theatre.

A Rich and Varied History

In the early 1900s, local deeds suggest that the theatre had been called the “Hippodrome” and later the “Astor,” which carried on well into more recent decades. It was while the theatre was named the Astor in the 1930s that the space was expanded to constitute what is now the present auditorium, with its expanded stage and seating area.

While the Astor had shown popular feature films of the period, establishing itself as a second-run movie house, the theatre later exchanged hands and resorted to reeling X-rated films by the 1970s. Eventually, the Astor closed in the mid 1980s after poor maintenance and a brief stint with religious productions under the guise of the “Trinity.”

From second-runs, to adult films, to religious entertainment, the theatre had garnered a diverse reputation which the present owner of the Allen Theatre had set out to combat. The first aspect targeted with change was the name of the theatre which had been jaded by illicit films and the installation of a club where live bands and audiences demolished the decor of the Astor.

And what may have seemed like an unreasonable extent of renovation and contrary to the advice not to embrace the effort, the theatre has since become a neon emblem of the community.

The theatre audio is Dolby Digital EX and has been installed by Clair Brothers Audio Systems, Inc. of Lititz, PA and RMS Service and Electronics Inc. of New York City —t wo of the most reputable leaders in the world of sound — ensuring an outstanding sound performance for all Allen Theatre screenings. Further, RMS in New York City also provided the theatrical sound technicians for director George Lucas’s New York City premier presentation of Star Wars: The Phantom Menace.

The Allen Theatre more recently installed a new projection system, including state of the art lenses for your viewing pleasure, with installation by Cardinal Sound and Motion Picture Systems of Beltsville Maryland, providing a bright sharp image for all Allen Theatre features.

The Art Deco style suggests that the theatre has had a renaissance of taste popularized in the 1920’s and 1930’s. With total renovation complete, the Allen is essentially a new theatre on the site of an old one.

With a staff of about twenty employees and a full-time projectionist, this family-operated establishment has drawn crowds from outlying regions of the community, including a four-county area. The intimate environment is a particularly important feature of the Allen Theatre, breaking away from contemporary trends toward major cineplexes that have sprung up alongside malls in the outskirts of suburbia. The Allen Theatre is instead a return to the downtown.

Not only does the Allen Theatre share its locale with small town eateries, but Annville is home to Lebanon Valley College, a liberal arts school with an enrollment of over 1,000. The theatre, as a result of its proximity to campus, has virtually become an off-shoot of campus life, mingling students with community patrons. The Allen has been host to the college’s Sundays at the Allen film series, as well as numerous other college-sponsored events.

Since its debut and formal dedication by Hollywood director Randal Kleiser (with credits including Grease and It’s My Party), the theatre and coffeehouse have become a premier venue for film and live entertainment.

This Lebanon County landmark, central to entertainment in the region, suggests that rather than tearing down the facade of years passed, character can be preserved and restored – flourishing with a new generation of patrons along the way.

The February 24, 1925, issue of the Lebanon Daily News reported that Mr. Mauger had provided his Blue and White Theatre as a location for an annual get together of the Annville Chamber of Commerce. If Hissler’s Annville Strand was the same house as the Blue and White, which seems likely, then the new owner, Goodwin, must have restored the original name, as the Blue and White Theatre is advertised in the Lebanon paper from 1924 through 1929. I’ve found no ads for a Strand at Annville. The paper has ads for a Hippodrome (or Hip) Theatre, but they might be for a house of that name in Lebanon itself, as here was a Hippodrome in operation there as early as 1913.

The Astor Theatre in Annville had RCA Photophone equipment installed in 1931, as noted in the March 31 issue of Motion Picture Times. I haven’t found any references to the Astor earlier than 1931, and no references to the Blue and White later than 1929, so it’s quite possible they were the same house.

Question back in the 70s I believe, they had this outdoor adventure man do a seminar in the Aster theater it was during the winter time because it was snowing, does anyone remember this and if so what was the man’s name ? Thanks