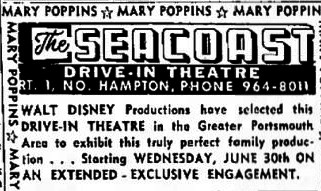 The North Hampton Drive-In was opened May 31, 1952. It was renamed Seacoast Drive-In on April 6, 1960 and was owned and operated by Norad Enterprises.

The Seacoast Drive-In closed in September 1983 and was demolished. Today, a self-storage center sits on the property with no trace of the drive-in left.

The North Hampton Drive-In on Lafayette had a challenging time going from approval and construction dating back as far as 1949 then halted for traffic safety concerns. In 1951, the drive-in was – again – approved for construction, halted, and re-commenced but missing its targeted 1951 opening. But on May 31, 1952, owner Louis Fucci’s North Hampton Drive-In Theater had its long awaited grand opening with a comedy double feature of “The Milkman” and “The Bowery Champs.” Most exciting day was when a freight train near the operation sparked and set the theater on fire causing traffic delays.

For the 1960 season, the Lucci family transferred the N-H D-I to drive-in veterans Anthony Norcia and Phillip Adams came in and renamed the ozone as the Seacoast Drive-in having their grand opening on April 7, 1960. They fused their last name becoming Norad Entertainment. In June of 1960, a local baptist church held services at the Seacoast and “Gone with the Wind” played on the big screen. The Seacoast operated through the 1977 season. On September 25, 1977, the drive-in’s season closed with a Russ Meyer triple feature. If the local paper is correct, those are the final showings for the drive-in which would be a nice way to go.

A 2015 Seacoast News online article stated that in 1978, the Fucci family decided to discontinue the drive-in. Ricardo Fucci began the redevelopment of the former Seacoast Drive-In Theater “successfully transforming the site into the retail and commercial property" which was part of Lafayette Acres. That makes the timeline of the ozoner about 25 years from 1952-1977.

I am Anthony Norcia’s youngest son and have fond memories of growing up at the Seacoast Drive-In. The company that took over the drive-in in 1960 was Norad Enterprises. The theater shut down in September 1983. It’s final night was rained out, but the bill consisted of “Never Say Never Again” and another Warners co-feature. The lost stood vacant for a few years until it was turned into a car dealership, and then a self-storage center.

It looks like the roadside sign may still exist and is now used for the Route Self Storage business on the site.