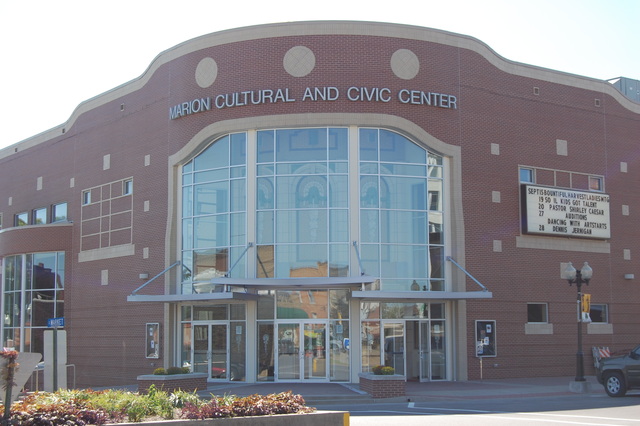 Opened in 1922, the Orpheum Theatre sat over 900, and was ornately decorated in a mix of Renaissance and Neo-Classical styles, complete with gold leaf, elaborate plasterwork, and a multicolored terra-cotta facade. The theater was hailed not only for its beauty, but its excellent accoustics, as well. It was the largest of Marion’s movie houses, and the flagship of the “Junior Orpheum” circuit in the far southern Illinois region of Little Egypt.

Not only were vaudeville and movies presented at the Orpheum Theatre, but it was host to many civic events, as well, over the years. By the mid-1950’s, however, the theater was mainly used as a movie house. The Orpheum Theatre was closed in 1971 due to declining attendance, and two years later, was acquired by the City of Marion, which planned on demolishing the historic structure and replacing it with a parking lot.

However, due to public pressure, that plan was nixed in favor of restoring the Orpheum Theatre to its original splendor and converting it into a performing arts venue. A year later, completely by volunteer effort, the former vaudeville and movie house was reborn as the Marion Cultural and Civic Center, which soon became renowed all over Little Egypt and neighboring states as a center of culture, entertainment and civic pride. Featuring everything from appearances by big-name celebrities, to orchestra, dance and, onscreen, classic movie series, the former Orpheum’s stage also was where high school graduation ceremonies took place, as they had over the previous decades.

Also, the high school used the theater’s stage for its musicals, and in 1997, one of the high school musicals, “Bye Bye Birdie”, would prove to be the final performance at the landmark theater. During the early morning hours, of March 10th, 1997, a blaze quickly raced through the Civic Center, and totally gutted the theater, leaving it a smoldering shell after the blaze was put out. The facade of the Orpheum Theatre was salvaged, but the remainder of the theater was razed, and in 2000, it was decided that a new Cultural and Civic Center would be built on the site of the old Orpheum Theatre and a couple of other demolished neighboring structures.

After two years of fund-raising, construction began on the new building, and was completed in 2004. The new, larger venue like its lost namesake (of which its restored 1922 terra-cotta facade became part of), has become once more a center of culture and enjoyment in Marion and the surrounding region.

This theater is set to open next month. The original facade is included in the design, but it’s placement has been changed. If you go to the web site above, they show the facade on the side of the building. The facade is now on the corner, at the entrance, which is where it was on the original. The building is very good looking, and the facade is beautiful. I never remember seeing the original, since I was in grade school when it burned, but can remember when it did. I also think that the status of the building should be changed to demolished, since the new building is much bigger than the original, and is not designed to be a movie theater.

The building has still not been declared finished, although there have already been several events held here. There are also several events planed for the next few weeks.

It’s a success!
Though still a ways away from “100%” finished, pending further fundraising efforts, the new Marion C&C Center is already exciting – already inspiring – already instilling that wonderful feeling of accomplishment in another new generation of young performers, and joy in the reminiscing of those returning.
The latest photos will be found here:
http://www.marionccc.org/current.html
As you can see, the final (improved:) design included the original entrance facade that was saved, integrated right into the new corner entry; the way it was years ago, but with an outer glass shell to provide the double-entry needed for the new air-conditioned facility.

The first new musical of this new age of the center will always be remembered by the people as well as the children of Marion, who performed the Jr. version of “The Fiddler On The Roof” to two nights of sold out crowds!

We’ll also cherish the crowd who carved out a special place in the heart of Christian artist Mark Schultz years ago, then packed the new house to welcome him back once again, beginning another chapter of praise and worship in the heart of Marion.

Now that enough of the building is complete to allow quality events and memories like these, it will surely be only a matter of time before more generous individuals step forward to help out this small town with it’s dedicated crew of big dreamers who envision all the potential of the arts in Southern Illinois.

Concerts and musicals, plays and performances; Community Choirs and Community Theater, it’s nice to know the dream is still alive, and will have such a great place to call home!

The Civic Center is having its open house this weekend.

This web page has several photos of the original Orpheum Theatre.

Vaudeville, Old and New by Frank Cullen lists the Orpheum Theatre at Marion as a Gus Sun House. Sun liked the name Orpheum and had several theaters of that name in his regional circuit, and was free to do so because nobody connected with the actual Orpheum circuit had ever trademarked the name.

I don’t think that the Marion Orpheum was ever part of Martin Beck’s Orpheum circuit. Most of that circuit’s houses were west of the Mississippi, and those that were east of it were in large cities such as Chicago and New York.

Anyone know what happened to the organ?

Records of the American Terra Cotta and Ceramic Co. indicate that architect Samuel W. Bihr, Jr. designed alterations for the Orpheum Theatre in Marion. The records don’t list the year of the project.