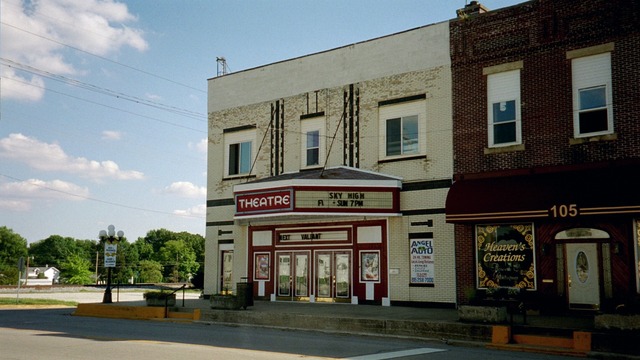 Built in 1894 as a hardware & furniture store. By 1914 one part of the building had become a movie theatre. Opened in 1937 as the Modernistic Theatre, this movie house was built in Art Moderne style on Seminary Avenue. A few years after it opened, the theatre’s name was shortened to the Modern Theatre. In the late-1940’s, it was acquired by the Kerasotes chain, which renamed the theatre by shortening its name once again, as the Mode Theatre.

In the late-1990’s, the theater was taken over by the same people who operate the Harvest Moon Drive-In in Gibson City. It is now known as the Onarga Theater.

There is a view of the Onarga on this site:
http://tinyurl.com/c4jxt2

Onarga Theater owner Randy Lizzio needs $65,000 to buy a digital projection system to keep his movie house going. But he wouldn’t think of asking a bank for a loan.

After all, the Onarga Theater, which shows first-run movies, barely breaks even.

So like the owner of the Harvest Moon Twin Drive-In Movie Theatre in Gibson City, Lizzio has turned to raising money for a digital fund.

So far, he has brought in $7,700, with about $2,500 of that coming from a taco dinner and a silent auction of donated and new items at the community center in Onarga.

“We’ve got a long way to go. We’re hoping in the process prices will come down a little bit, and hopefully, we’ll be able to meet our goal,” Lizzio said.

Mike Harroun, owner of the Harvest Moon, needs to raise even more, roughly $165,000, for digital projection systems for his two screens as the film industry moves permanently from film to all-digital releases.

So far, his digital fund is about $7,000 — and nearly $80 of that came from three Bloomington girls who gave Harvest Moon the profits from the lemonade stands they put up twice in their town.

“They wanted to keep the drive-in there because they really love coming there,” Harroun said.

Sanford Hess, operator of the Art Theater in Champaign, which turns a profit, but not a big one, knew he couldn’t afford an $80,000 digital projection system. (The costs of the systems vary according to the size of the theater, distance from the screen to projection booth and other factors.)

So last year, he recommended that a community cooperative form and take over the Art. An interim board of directors was established and set a goal of raising $100,000.

The elected co-op board recently reported that it has unofficially reached its goal — unofficial because shares ($68 each) purchased since July 4 have not yet been counted. The board is now taking applicants for a manager and expects to take over the theater in mid-August, four months earlier than expected.

The Art is among a few smaller indie theaters that apparently have survived the digital tsunami. Others haven’t been so lucky.

“It’s like a train that’s been rolling down the tracks for six years,” Hess said. “Everybody saw it coming, and finally it’s here. A lot of theaters will close. It’s unfortunate.”

Indeed, the National Association of Theatre Owners predicts that 20 percent of North American theaters, representing some 10,000 screens, will not convert to digital and will likely disappear from the American landscape.

Already, two area movie houses have shut down: the double-screen Gem in Villa Grove last year and Hoopeston’s Lorraine Theatre in April. Both buildings are for sale.

Soon after the closing of the Lorraine — an art-deco house built in the 1920s for stage events and movies — a Hoopeston resident named Scooter (his legal name) established the Friends of the Historic Lorraine Theatre Facebook page, mainly to gather ideas from the “Cornjerker Nation” on how to preserve it.

Why does saving small-town and indie movie houses matter? Michael Hurley, an owner of two independent theaters in Maine that have already undergone digital conversion, gave an answer to that in a commentary he wrote for Indiewire, published in February:

“I think of the millions of dreams and careers that have taken flight in a movie theater. I know that the economic development power of movie theaters has been profound. People want to live where there are theaters. For the same reasons that every successful city center, mall and downtown works to attract and keep a movie theater, small towns all over the world stand to lose a foundation that has kept them connected to the world. I believe the loss is unacceptable.”

And contrary to what some believe, the U.S. government, unlike some other countries, does not offer grants to help movie houses with digital conversion. Historic theaters in the United States don’t even qualify for tax credits for purchasing digital projection equipment, Hurley wrote.

Hess said people on both coasts are making the decisions that hurt small-town movie houses and drive-ins, mainly by arranging digital-projection system financing agreements that are available to only certain types of theaters.

The Art, Onarga and Harvest Moon do not qualify.

Via the agreements, Hess said, a third party basically buys the digital equipment on behalf of the theater. The third party is paid back by the movie studios over a period of time. The agreements don’t always finance all the costs of digital conversion and carry restrictions and requirements.

So Harroun, Lizzio and Hess have been forced to be creative to try to continue to provide services they feel are important to their communities.

Harroun, for example, believes there is nothing more American than going to a drive-in movie. So far, though, only six of the nearly 400 drive-ins nationwide have been able to convert to digital, he said.

“A lot of mom-and-pop ones — they’re going to close,” he said. “They can’t afford to convert; the money’s not there. I have a tremendous business and can’t afford it.”

While Hess tells people to go to Harvest Moon now because it might not be around much longer, Harroun believes he will raise the money for the digital conversion at the theater he has owned for 23 years.

“I’m positive I’ll keep the drive-in open. I just got to keep everybody on course,” said Harroun, who also owns Angel Services, an automotive repair and sales shop in Onarga, where he lives.

For its digital fund, the Harvest Moon so far has sold T-shirts, and purses and wallets made of film. Harroun also plans a family-friendly concert with various acts, including a headliner, on Sept. 8 at his drive-in 30 miles north of Champaign.

He’s selling $10 chances to win a 1967 Mustang he donated to the cause. The name of the winner will be drawn at the September event.

Like the Onarga and Art, Harvest Moon shows first-run movies seven nights a week. Admission is $6 a head with kids younger than 4 admitted free.

All three theaters also pride themselves on selling concessions at lower prices than the multiplexes; the Onarga Theater even sells fresh, homemade caramel corn.

Lizzio, who with his wife, Cheryl, bought the 215-seat Onarga four years ago, has been taking cues from the JEM Theatre in Harmony, Minn., when it comes to raising money for digital conversion.

The JEM turned to the community; it responded, donating more than $40,000 to the theater’s digital fund.

Lizzio points out that Harmony and Onarga are around the same size. Harmony has 1,020 residents; Onarga, 1,368.

“They’re like a success story; they were trying to raise the money, and they actually did it,” he said. “It’s very possible to do this because it’s been done by other places. Even in this economy.”

However, Lizzio realizes he and others in the same ship are running out of time. Though he’s upgraded his movie house, including the addition of digital-ready sound, he needs a digital projection system. Fox Movies has said it will not produce any 35mm films in 2013 and beyond; theater owners believe other movie studios are roughly on the same track.

So Lizzio, who also owns a sign shop in Onarga and recently started a promotional go-kart business, plans to step up fund-raising efforts in September. One will be the screening of the 1949 Gene Autry movie “Loaded Pistols.”

The single-screen Onarga Theater, which shows first-run movies seven days a week and charges $5 admission with kids 3 and younger admitted free, also sells T-shirts and on-screen advertising. All the profits from those sales go into the theater’s digital fund.

Lizzio said the majority of his fund-raising efforts will continue to be geared toward giving people something for their money, though the theater has received some no-strings-attached donations.

“I’m still positive,” he said. “I guess you have to go out, you can’t just sit back and wait and hope that people will donate. You have to be constantly out there to make more people aware of what you’re trying to do and educate them on what’s going on. A lot of people don’t know.”

The theater building was constructed sometime before 1894 as a hardware and furniture store. Between 1907 and 1914, the western half became a theater. It’s possible that this operated until a 1937 remodel replaced the facade and expanded the theater into both sides of the building.