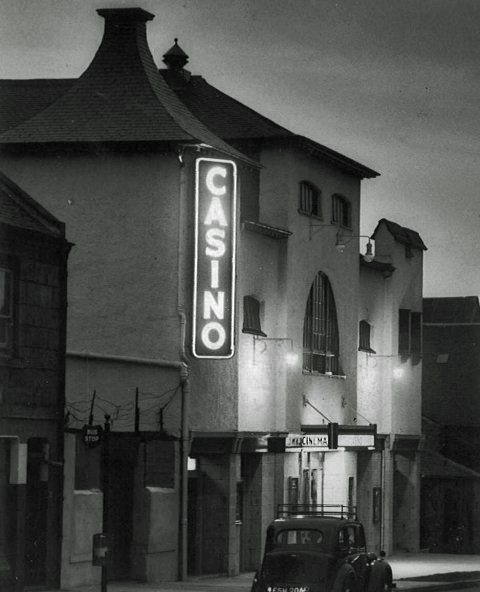 Aberdeen’s second purpose-built cinema opened on 7th February 1916. Occupying the site of a former slaughter-house, the seventy-seven foot white stucco frontage in Spanish Villa style was a great contrast to the run-down grey tenement buildings of the area. A large central window of ruby-tinted glass lit from behind shone welcomingly above the shallow canopy and below it the pay box was central to the main vestibule, smaller vestibules on either side leading to the auditorium via double swing doors with fan-shaped panels of richly-coloured stained glass. The auditorium, which seated 900, was decorated in Moorish style, with pavilions on either side of the twenty-seven foot wide proscenium and its unusual blue tabs with a scalloped valance. The whole scheme was set off by octagonal coloured glass light fittings suspended from the curved ceiling.

The Casino Cinema was the first Aberdeen cinema to introduce full-time cine-variety, occasionally supplemented by miniature revues, which lasted right up to the end of the silent era. Thereafter, hardly changed or upgraded, the Casino Cinema functioned very successfully, but was showing its age by the 1950’s, a plan to enlarge and modernise the building having fallen by the wayside.

In 1959 the cinema was fully renovated and streamlined by removal of all the internal detail and by refurbishment of the frontage. The Casino Cinema reopened on 7th June, but it was too little too late, and the cinema closed on 3rd October 1959. For a time it was a successful bingo hall, but it was too small to meet the huge initial demand. The bingo was transferred to the 2,000 plus seater Kinsway Cinema nearby and the building became a store for a number of years before beings demolished in 1971 to make way for apartments when the whole area was redeveloped.