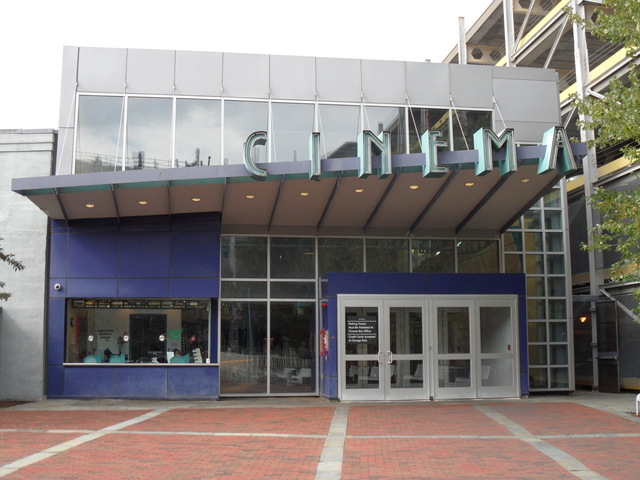 The Kendall Theatre is kind of a neat theatre also, and if there’s a particularly “hot” movie playing there at any given moment, one can expect long lines at the ticket counter inside. The Garage is reasonably priced, but their system’s awfully wierd. Anyway, back to the subject at hand, I’ve seen a number of movies there, such as Citizen Ruth, Good Will Hunting, Southie, Monument Avenue, Volver,
On the Waterfront, Fantasia, Fantasia 2000, and afew others. Sure wish they’d occasionally show some great golden oldie-but-goody classic films, but it looks like that won’t happen.

The map location shown here is not correct. The theatre is actually north of Binney Street, and its main entrance is on Binney.

I certainly enjoyed my visit in July 2012, when I saw ‘Beasts of the Southern Wild’. The staff were extremely welcoming and friendly. I gather the auditoriums range from 270 to 90 seats.

I am told that the projection staff at the Kendall isn’t that good at what they do does anyone have a comment on that? I am sure that by Hollywood standards I could find many faults in their presentation. Are they actually running The Master in 70mm?

According to the the list at the in70mm.com website they are. Let us hope that they have staff or can at least temporarily hire some people who know how to project it properly. I would guess, based on some other showings I am aware of, that the distributors are allowing the film to run from a platter, so it is likely that at least the Kendall Square will not have to worry about inexperienced staff trying to run a changeover system (unless their 70mm installation runs that way).

I thought the 70mm Master was going to Coolidge Corner, not here?

According to the list I cited above, both theaters are getting 70mm prints.

No, the Kendall doesn’t have 70mm capabilities. In fact I have heard they are weeks away from going digital in fact. The only other 70mm theater in greater Boston is my Somerville Theatre, and we were unable to book The Master because the Kendall has ‘clearance’ over us and blocks us from playing any title they want to play.

Sorry but the Coolidge Corner was the only Boston theatre to show “Master” in 70mm. They rought in 2 two 70mmDP70s for the 3 week oasion. The Kendall only ran it in 35 as did the other greater Boston theatres that booked it.