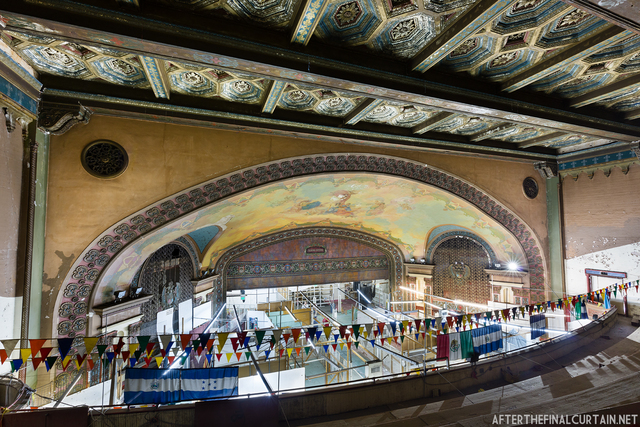 The Westlake Theatre is located in the MacArthur Park area near downtown Los Angeles. It had a gala opening September 22, 1926 with Monte Blue and Marie Prevost in “Other Women’s Husbands” on screen, supported on stage by Charlie Nelson and his Band and a Fanchon and Marco “Idea”. The original seating capacity was for 2,000. The theatre was equipped with a 2 manual, 10 rank Wurlitzer organ (which was later removed and eventually destroyed). The theatre’s large roof-top sign has not only survived, it is still in use, as it was renovated in 1987. Other theatres located near the Westlake Theatre were the Park Theatre (now a store) and the Vagabond Theatre (now a travel agency).

Built and operated by West Coast-Langley Theatres it was designed by architect Richard M. Bates in a Spanish Colonial Revival style on the exterior, with Spanish Rococo details, known as Churrigueresque. This style is carried out throughout the theatre. Inside the auditorium there are decorative side grilles beside the proscenium, behind which were the organ chambers. A large painted panel is located above the proscenium.

Operated by Fox West Coast Theatres for many years, in 1935, architect S. Charles Lee was commissioned to modernise some features of the theatre, mainly the ticket office, marquee and some work in the foyer. The Westlake Theatre was a first run-movie theatre, but in later years, Metropolitan Theatres bought the theatre and ran it as a second and third run movie house, and from November 21, 1976 it screened Spanish-language films. The Westlake Theatre closed on June 26th, 1991. Like many Los Angeles theatres, the Westlake was transformed into a swap-meet. A level concrete floor was poured in the orchestra area and traders stalls now operate from this and the foyer. The balcony remains intact, but out of bounds. All the original decorative treatment remains.

In February, 2008, the Community Redevelopment Agency of Los Angeles purchased the theatre for $5.7 million and adjoining properties for an additional $5 million dollars. The agency wants to resell the space to a buyer who will restore the theatre into a movie and performing arts space, and redevelop adjacent property with affordable housing, retail and parking. The swap-meet moved out the building in 2011. In the summer of 2017, the Westlake Theatre was put up ‘For Sale’, with any future use/redevelopment to be considered. It was sold in March 2018 with plans to restore. The building stood empty & unused until September 2022 when it began use as a swap-meet again

The Westlake Theatre is designated a Historic Cultural Monument.

The rooftop scaffold sign was prominently featured in a recent episode of “America’s Most Wanted.”

Currently the swap meet is no longer there, BUT no work is being done either. Wonder what is up?

In the episode titled “Seppuku” of the USA network’s science fiction show “Colony” which aired on March 30th, 2017, the protagonists invade the hideout of the Red Hand anti-alien occupation resistance group which is located in the Westlake Theatre.

An overhead shot of the “Westlake Theatre” sign above the building establishes the location, though I then can’t tell if the actual interior was also used for filming, but it’s an exciting running combat scene within a classic theater.

I loved the Westlake, even though when I went there it was $1.25 double feature house.I had the feeling of visiting an old Royal, down her luck, threadbare, but still beautiful.I hope it reopens as a still grand dame!

I visited the Westlake a few months ago. Check out some photographs and a short write up at After the Final Curtain.

I drove past the Westlake early this morning and the DOORS WERE OPEN. From what I could see, the ground has been leveled with no seating remaining inside. Lights were all on. and the space is HUGE. I sincerely hope they do right by this theatre.

Reopened by Metropolitian theatres on November 21st, 1976 with “The Exorcist” in Spanish. Grand opening ad posted.

What is going on with the building