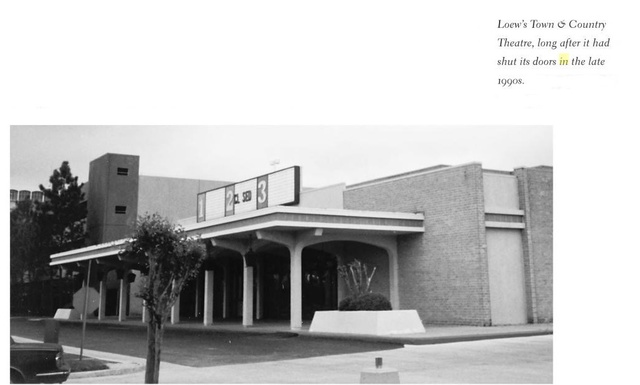 Any further information on the Loew’s Town & Country III theater would be appreciated.

Like with Town & Country 6, I was surprised this theatre didn’t have an entry here, and actually you could walk to those theatres in only a minute or so. Makes me wonder who owned T&C 6, in case it was just nasty competition to open it up right next door to T&C III. They really should have tried expanding, as they had more than enough room around the building to double, even triple their amount of screens, but since they never did they never stood a chance, which was too bad, because probably 95-99% of the time when a movie theatre takes the dollar route they become scummy. With T&C III, they still had most of the original decor (as far as I could tell, when I started going there in the 70s) and neat wall lamps and all.

Anyway, updating this entry would be good, as I’m just guessing on the current street address; before it became the Sam Houston Parkway, it was called West Belt, I think. I don’t know if the old street addresses coincide with the Parkway block numbers nowadays or if they’re totally different.

I grew up in Houston in the 70s/80s and went to these two theatres a lot when I was a kid. Even though they were so close together, they appealed to different tastes. The Loews T&C 3 showed more highbrow fare for adults, where I feel like the T&C 6 showed more mainstream popcorn-type movies (with exceptions, of course). Both theatres were very strict about R-rated movies, and if you bought a ticket for a PG movie, then sneaked into an R movie, the ushers would walk through and check stubs before the movie started or during the previews and kick you out. I got kicked out trying to see PURPLE RAIN many times at T&C6, finally saw it at the Galleria II.

Darryl, I have a couple of pictures of newspaper ads from the 80s for both theatres and the address for both is listed as “West Belt @ I-10.” I did find the T&C6 listed as “666 Town & Country Village” elsewhere in the newspaper.

Great memories all around.

Had a 70mm auditorium. I remember seeing “Close Encounters of the Third Kind” there.