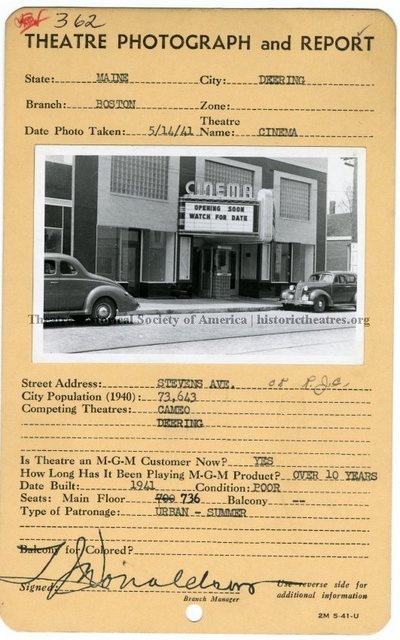 The Cinema was a very neat-looking modern movie theatre in the Deering section of Portland.

The Theatre Historical Society on-line archive has the MGM Theatre Report for the Cinema; it’s Card # 362. Adddress is Stevens Avenue. There is an exterior photo made on May 14, 1941. (Nice looking!) Condition is “Poor”. (Why? – it was a new house.) The report says that it opened in 1941, was showing MGM films, and had 736 seats. Competing theaters were the Cameo and the Deering, both also in the Deering area.

The Cinema Data project states that this theater lasted in use until at least 1951. They opine that the reason the MGM agent graded it as “Poor” in his report is because it was unfinished at the time of is visit. Was he that dumb?? Why would he grade a new theater as “Poor” just because it was not finished when he arrived? The reunion notes of the Deering High School Class of 1956 are on-line – they have nice memories of the Cinema which they say was located “at Woodford’s Corner”. It must therefore have been open in the mid-1950s.