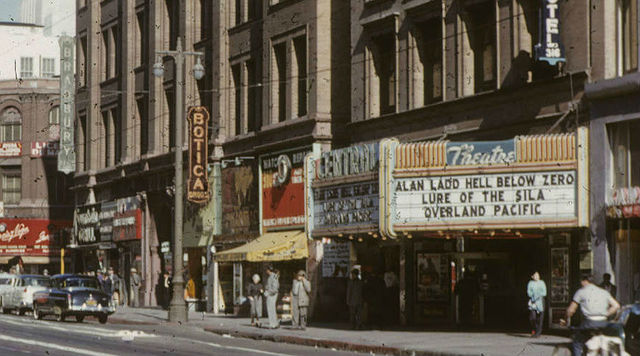 The Central Theatre was located along Broadway in downtown Los Angeles. It has been demolished and most recently housed a bridal shop on the site.

OK, there’s some contradiction there between my two comments, but I think the 1973 building is in fact the Central theater location. I can’t explain the 1960 photo.

I’m now wondering where that building with the arched windows was (or is) located. It looks familiar, but I can’t quite place it.

Perhaps it was on the other side of Broadway. I know there was a caption originally, but I would have to dig through the site to find it.

The Central Theatre can clearly be seen in the 1933 movie ‘FOOTLIGHT PARADE’, starring James Cagney, Ruby Keeler, & Joan Blondell.
In this film chorus girls change costumes in buses while traveling from theatre to theatre, and pass by the Central and Million Dollar.

The Central Theatre is listed at this address in the 1929 Los Angeles City Directory. I don’t have access to any earlier directories, so that’s the earliest I can confirm that it was open.

A thread at the L.A. ModCom preservation board, http://www.lottaliving.com/bb/viewtopic.php?t=8572, has before and after photos of that building, and the L.A. Times article about the fire.

You can see the Cozy and the empty spot where the Central was in the background of another early ‘70s photo from that thread illustrating where the fire was.
View link

Here is a zoomable version of the photo Nathan linked to.