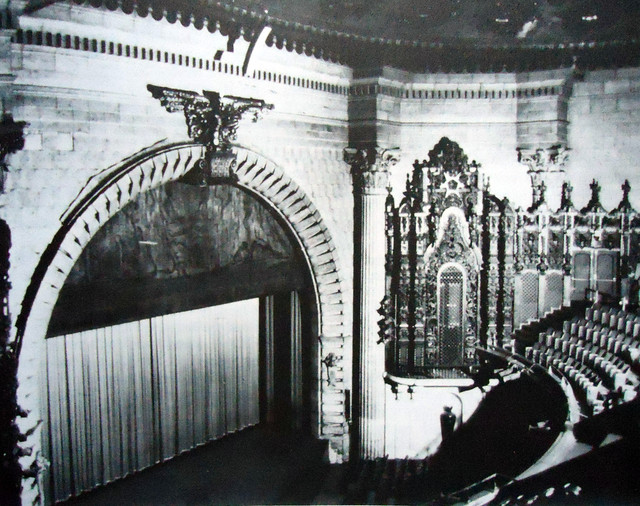 Sid Grauman’s first major theatre was named Grauman’s Theatre when it opened on February 1, 1918 with William S. Hart in “The Silent Man” and a personal appearance by W.S. Hart. Following the hype over its price tag, it was immediately known as Grauman’s Million Dollar Theatre, although it was not officially named this until March 1919. The auditorium was built behind the twelve story Edison office building, the exterior is a magnificent example, of a variation of Spanish Rococo style, known as Churrigueresque. Deeply molded features decorate the theatre entrance and higher up on the façade are heroic figures of the arts, with symbols of western Americana, such as bison head, eagles and longhorn steer skulls, all the work of sculptor Joseph Mora.

The 2,345-seat auditorium, which is 106 feet long and 103 feet wide, is decorated in a similar style to the exterior and has a curved proscenium arch 40 feet wide and 40 feet high. The ceiling has a coffered dome and there are numerous statues and niches. The organ grilles on the side walls are in the style of Spanish Colonial altar screens. Architect William Lee Woollett is credited with the design of the interior. The proscenium, with its flanking columns, and the coffered ceiling, foreshadowed the later design by Woollett for Grauman’s Metropolitan Theatre (later Paramount) which was his most fantastical achievement in movie palace design. The eclectic, fantasy design of the Million Dollar Theatre in 1918 contrasted with the more conventional, Neo-Classic look of most movie palaces at that time. By the end of the 1920’s, exotic themes and atmospherics were the rage in movie palace design, and many early movie palaces looked dated, but the Million Dollar Theatre still looked fresh (and almost a century later, still wows.

Although designed specifically as a movie palace, full stage facilities were installed. Within two months of opening, Sid Grauman began to stage spectacular prologues prior to the film show on the 35 feet deep stage, which was 103 feet wide. Seating was provided for 1,400 in the orchestra and 945 in the balcony. An unusual feature was the positioning of the projection booth at the front of the balcony, rather than the usual position at the rear of the balcony. This gave a shorter throw to the screen which resulted in a brighter picture. There was a 30-piece orchestra. Initially a small 2 manual, 7 rank Wurlitzer organ was installed and it was opened by Jesse Crawford. This organ proved to be inadequate, and it was replaced on 23rd December 1918 by a larger 2 manual 16 rank Wurlitzer organ. The original organ was transfered to the Rialto Theatre on S. Broadway, which Grauman also operated.

Grauman sold his interests in his downtown Los Angeles theatres (the Million Dollar Theatre, Rialto Theatre and Metropolitan Theatre-later Paramount Theatre) to Paramount-Publix in 1924, in order to focus on Hollywood, notably running the Egyptian Theatre and planning the Chinese Theatre. In 1929, Paramount transferred the huge chandelier that had been hanging in the short-lived Broadway lobby entrance of Grauman’s Metropolitan Theatre (later Paramount Theatre), and hung it in the domed ceiling of the auditorium of the Million Dollar Theatre. The theatre was leased out to Fox West Coast Theatres briefly, but by 1930 the Great Depression was hurting theatres and they closed it down. Late in 1930 it was taken over by an independent operator named Lazarus. By 1941 it was being operated by Popkin & Ringer Bros. who operated nine other theatres in downtown and had their headquarters at the Million Dollar Theatre.

In 1945, the theatre was taken over by Metropolitan Theatres, who breathed a new lease of life into the building by presenting live shows starring Billy Holiday, Cab Calloway and Lionel Hampton and His Orchestra. Frank Fouce took over the management of the theatre and from August 30, 1950, the Million Dollar became a film and stage venue exclusively for Spanish speaking audiences. It was the first downtown Los Angeles theatre to have this policy and stars such as Maria Felix and Delores Del Rio appeared on stage. During the early 1960’s, the foyer area was ‘modernised’ with a drop ceiling suspended, and the walls were covered, all of which hides the original plaster decoration. From 1975 it was showing new general release films, dubbed into Spanish and live Mexican vaudeville shows one week in every month. Metropolitan Theatres closed the Million Dollar Theatre on March 1, 1993.

In October 2005, the Million Dollar Theatre was leased by former nightclub owner Robert Voskanian and work soon began on a restoration of the theatre. As of the end of February 2008, one million plus dollars had been spent to refurbish the Million Dollar Theatre. New marble flooring was installed, the proscenium’s stone archway was refurbished, and the theatre was redecorated with a new red and gold paint scheme.

The Million Dollar Theatre reopened on February 28, 2008 with a performance by Mexican singer and Latin Grammy Award winner Pepe Aguilar. Since then, currently with 2,008 seats, it has hosted classic film screenings, movie premieres, stage performances and concerts. Sadly, this venture, though popular, failed to meet a profit, and the operator ended his lease in June 2012. In 2014 it began monthly screenings of classic movies, and the theatre is available for film shoots and special events.

On July 2, 2019 the Million Dollar Theatre was declared a Historic-Cultural Monument by the City of Los Angeles.

I was there tonight to see THE GODFATHER. They had an excellent 35mm print but it was very dark and much of the sound was unintelligible due to bad acoustics. They did use the curtain at the beginning and end. I sat in the balcony. There was a very large crowd.

The Million Dollar Theatre is again available for rental, for events, private functions and film shoots. It is also showing classic movies recently on a more or less monthly basis. Website is http://www.milliondollar.la/. It is run as part of the “Grand Central Square Project” which includes the apartments above the theatre, the adjacent Grand Central Market, and Grand Central Square and adjacent parking garage. Good to see it is still in use!

The exterior of the Million Dollar Theatre is shown in a scene from Blade Runner. The marquee. Great film and other Los Angeles sights are in the movie too. 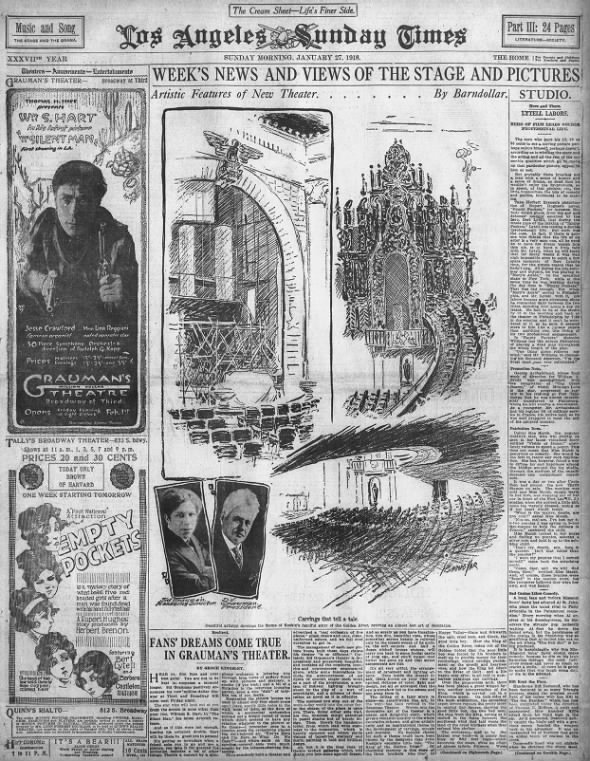 This theatre is features briefly in the 1949 classic Film Noir, D.O.A.

The Million Dollar is being operated as an event venue and filming location. Apparently it no longer has a dedicated web site, or the monthly movie screenings. It has this page at the web site of the operating company, the Piovra Group, which also manages 22 other Los Angeles area venues. There are some photos, mostly of the auditorium.

Regarding the “million dollar” moniker, I have a March 1919 newspaper advertisement where that has already been added to the theatre’s name.