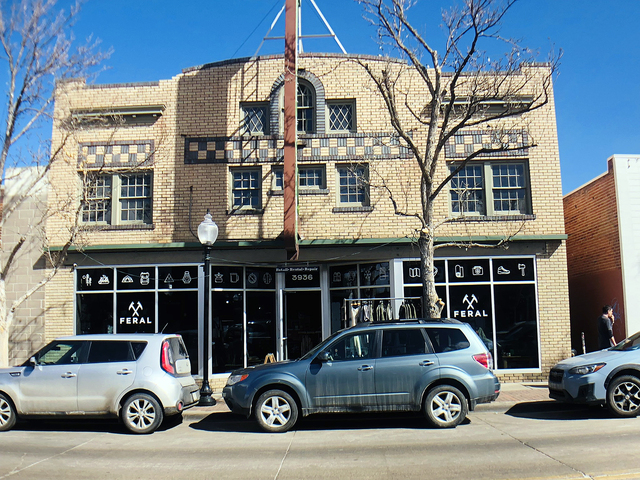 The following paragraph was from a North Denver Tribune article regarding the long time occupant, Flesher-Hinton Music moving dated May 21, 2015 and titled “Tuneful Legacy Pulls Up Stakes” by Laurie Dunklee.

“The music store’s distinctive landmark building at 3936 Tennyson Street was built in 1908 as the Berkeley Theater and became the Alcott Theater in 1918. “It was part of the entertainment district, along with Elitch’s and Lakeside amusement parks,” Simpkins said. “People came over here on the trolley for the day. As a theater, our building had a sloped floor down to the screen. A flat floor was built over it, but the ceiling in the basement still slopes downward.”

According to Phil Goodstein’s “North Side Story,” the Alcott Theatre closed in the late-1920’s, about the time of the advent of talkies, when the Oriental Theatre established itself as the premier Berkeley movie house. In 1932, Miller’s supermarkets opened the Alcott Public Market in the former cinema. The grocery exited in 1940, when it occupied a new home at the corner of 43rd Avenue and Tennyson Street [most recently Ward-Carter Dance, now in the process of re-development]. In 1945, North Denver Furniture Company opened in the former Alcott Theater building.

Mel and Geraldine Flesher, along with Geraldine’s uncle, J. Carl Hinton, started Flesher-Hinton in 1951 in the space across the street that is presently the Denver Cat Company. Mel Flesher started the company as a wholesale instrument repair shop. He bought the 3936 Tennyson Street building in the mid-1960’s.”

The music store’s move was necessitated by a lack of parking, congested streets and a need to downsize. They sold the building to South Broadway tattoo parlor called Creative Customs, closing the $1.7 million sale on November 23, 2015. Creative Customs plans to operate the building as a second location and plans to leave things with the building largely as they are now with no major changes in sight. The building is 8,376 square feet and (as of 2015 on the county assessor’s website), valued at $921,699.

Listed in the Film Daily Yearbook of 1928 as seating 1,500 and the exact same address as today.

There appears to have been an earlier Alcott Theatre, when this house was still the Berkeley. An Alcott Theatre was listed at 41st and Tennyson in the 1914-1915 American Motion Picture Directory. The Berkeley was not listed, so might have been operating as a legitimate house at that time (or the Directory just failed to list it, which was not unknown.)